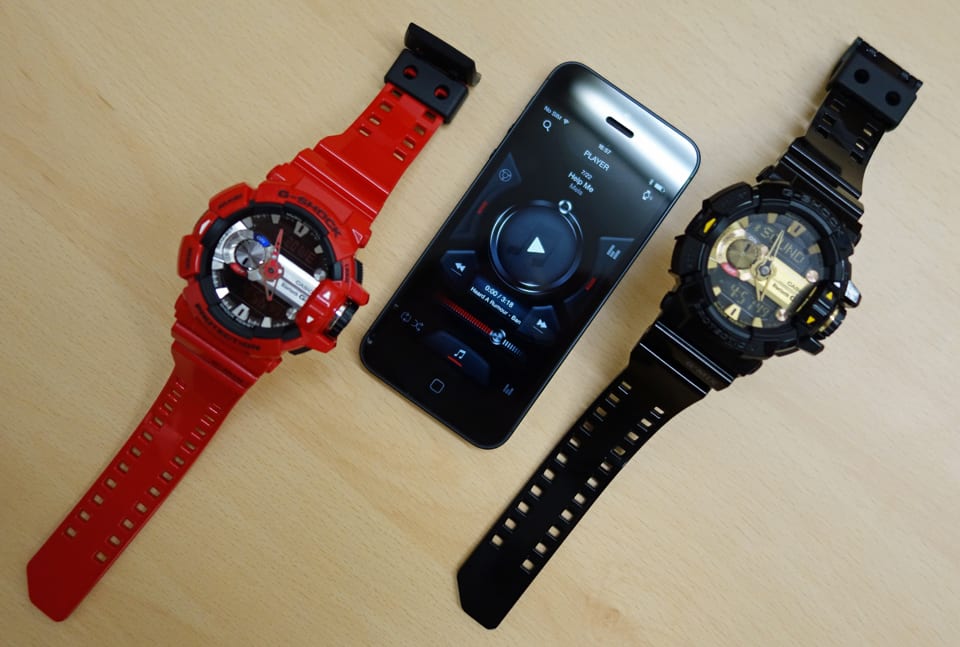 Casio continues to inch its G-Shock series toward something a little smarter, while holding onto a simple monochrome LCD display and that distinctly G-Shock styling. The "G'Mix" GBA-400 improves on the typical digital watch feature list through Bluetooth, a pair of dedicated apps (one for the watch part, one for the music-playing part) and your smartphone, whether it's iOS or Android. Oh and there's a giant dial control on the side and it's really satisfying to play with. 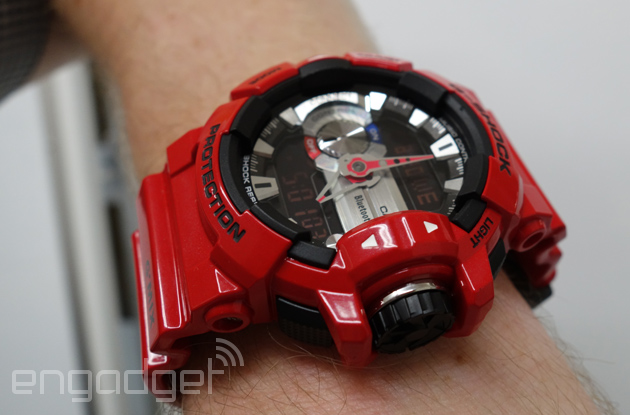 See? Once you've linked the G-Shock to your smartphone, the dial can be set up to adjust volume, skip tracks and even cycle through several different equalizer settings. You can also make your own custom equalizer profiles within the companion music app -- and even decide which modes get added to the watch-based selector. To cycle through those menus, however, you need to depress another button. Bluetooth syncing is assigned to yet another button, while the third button does illumination and the fourth cycles through digital watch features like stopwatch and alarm.

For a digital watch with a few tricks up its sleeve, it's unfortunately not all that intuitive. There are a lot of buttons, and you'll need to do a lot of scrolling to get what you want done -- we had to ask multiple times for driving instructions, inadvertently changing equalizer settings when we simply wanted to skip a track. We also don't quite get the reasoning for two mandatory app downloads: Surely Casio could integrate the watch features into the music app?

The G'Mix's best trick is its music-recognition integration, courtesy of SoundHound. With two scrolls upwards on the rotary switch, it'll kick your smartphone into action, listening to the music. While it'll offer up artist and purchase details within the phone app, it'll also send a basic line of song information to the watch face itself -- it all works without you having to touch the phone at all. From our brief testing with Casio's team, it had no problem picking up a couple of '80s hits -- and it was all relatively easy to initiate. 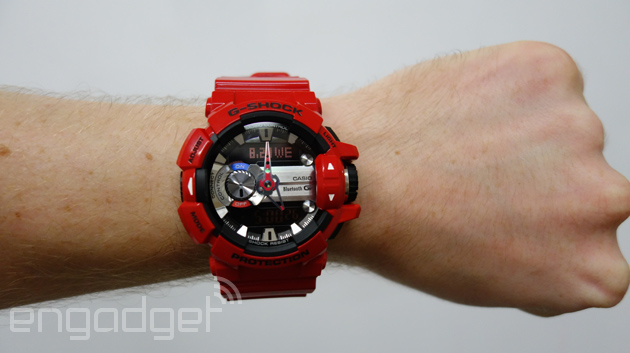 Through the same Bluetooth connection, the new G-Shock can also sniff out your phone and ring it, when it's somehow hidden itself. (Last year's models apparently packed the same skill.) Unlike a lot of Casio's watches, there's no solar charging here, but the battery is rated for two years, which factors in using the mobile link feature for about two hours a day. Obviously, two years per battery change sounds much better than current smartwatch mileages -- even if the skill set of the Casio model is a severely reduced one. The watch goes on sale in Japan first, priced at 23,000 yen (roughly $220), but it'll roll out globally after that -- Casio expects to offer the model in the West later this year.

In this article: bluetooth, casio, equalizer, gba400, gmix, gshock, music, notsmartwatch, soundhound, watch
All products recommended by Engadget are selected by our editorial team, independent of our parent company. Some of our stories include affiliate links. If you buy something through one of these links, we may earn an affiliate commission.