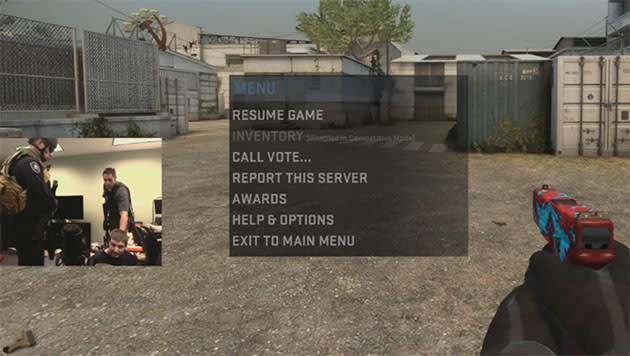 A Littleton, Colorado, man named Jordan Mathewson was raided by a heavily armed SWAT team thanks to a false shooting and hostage report, and all the chaos was captured on a Twitch game stream (see below). During a Counter-Strike session, Jordan "Kootra" Mathewson -- a founder of The Creatures -- suddenly noticed things around him were amiss. "Uh oh. This isn't good. They're clearing rooms. What in the world, I think we're getting swatted," he says in the video. Luckily, Mathewson stayed calm throughout the ordeal and was released a short time later.

On top of invading his offices, police locked down several schools and businesses in the Littleton area. Suffice to say, the situation was extremely dangerous, and the police chief said, "We have real guns and real bullets, and there's potential there for some tragedy."

Sadly, Mathewson's ordeal isn't an isolated one: "Swatting" is the act of calling in false reports to draw real SWAT teams to a target's house, and is often inflicted on rival gamers. As Vice News pointed out recently, the phenomenon is fairly new and can easily result in deaths, especially when malicious calls involve shots fired. There's no word yet on who perpetrated the hoax (despite one claim) but police said they'd prosecute whoever it was "to the fullest extent of the law."

A similar event occurred recently to Sony Online Entertainment head John Smedley. A flight he was on was diverted after a group known as "Lizard Squad" sent a Twitter message to American Airlines warning of (false) explosives on board. Like the "swatting" action above, real people were put in real danger because of these malicious pranks.

In this article: fake, gaming, live stream, swatted, swatting, Twitch, video
All products recommended by Engadget are selected by our editorial team, independent of our parent company. Some of our stories include affiliate links. If you buy something through one of these links, we may earn an affiliate commission.