This tiny, bipedal robot can somersault and run faster than a toddler 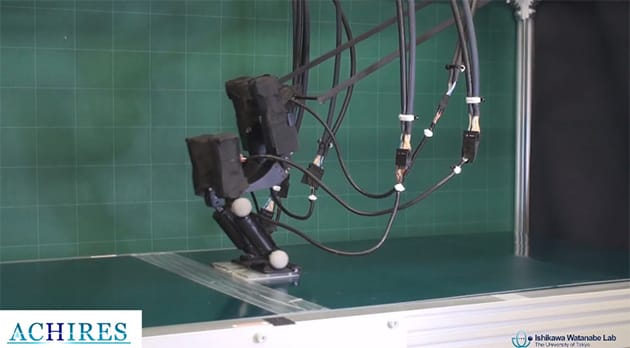 Those of you with recurring Terminator-esque nightmares of a not-so-distant future ruled by machines won't have to worry much about one robot developed by a research team at the University of Tokyo. The group (which happens to be the same one that created a robot that'll cheat its way to rock-paper-scissors victory every time) crafted a bipedal 'bot called Achires that can run at speeds up to 2.6 miles per hour. What makes Achires so special is that it doesn't actually factor in complex biomechanical factors like the zero moment point. Instead, its creators have a high-speed camera trained on it at all times, and the system uses all that visual data to continually keeps the robot's running posture stable. The end result? A way to get a robot running that doesn't require the sheer computational horsepower that some of its other bipedal cousins do. A few limitations help ensure that the Achires won't race into anyone's night terrors. It's downright tiny, for one -- it's legs are only about 5.5 inches, and they can only keep up that pace for about ten seconds. Oh, and the very camera technology that allows it to run with proper form in the first place means the Achires can't break free of its stage anyway -- you're all safe, don't worry.

Via: Wall Street Journal
Source: Ishikawa Watanabe Laboratory
In this article: achires, biomechanics, japan, robotics, robots, running
All products recommended by Engadget are selected by our editorial team, independent of our parent company. Some of our stories include affiliate links. If you buy something through one of these links, we may earn an affiliate commission.