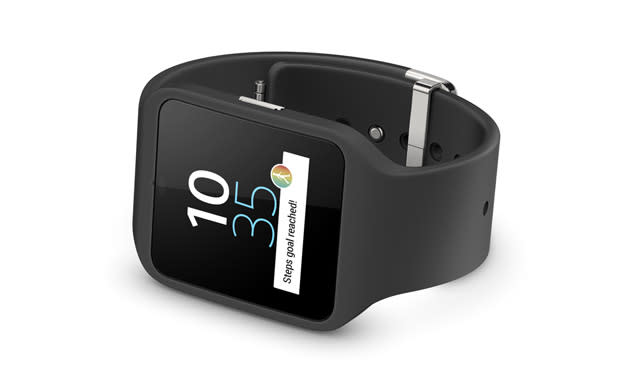 Sony's been making smartwatches since before they were cool, and with the advent of Android Wear, it was only a matter of time before they made another. Enter the SmartWatch 3, announced at IFA today, running Google's new platform specifically for wearables. The third member of the family comes with a 1.2GHz quad-core processor, 1.6-inch screen and Sony's now trademark IP68 waterproofing. Other key features include 4GB of storage, 512MB of memory, NFC support, GPS and a 420mAh battery (charged over micro-USB). Sony has also made it clear that the SmartWatch 3 will make use of the incoming Android Wear features we recently heard about (that make the watch more useful on its own). It's also promising "better" battery life from that 420mAh cell -- suggesting it'll be good for up to two days of use, or four days on standby. If you're a believer in "third time lucky," then you can pick one up for 230 euros starting this fall.

In this article: androidwear, ifa, ifa2014, mobilepostcross, smartwatch, smartwatch3, sony, sonysmartwatch3, watch, wearable
All products recommended by Engadget are selected by our editorial team, independent of our parent company. Some of our stories include affiliate links. If you buy something through one of these links, we may earn an affiliate commission.