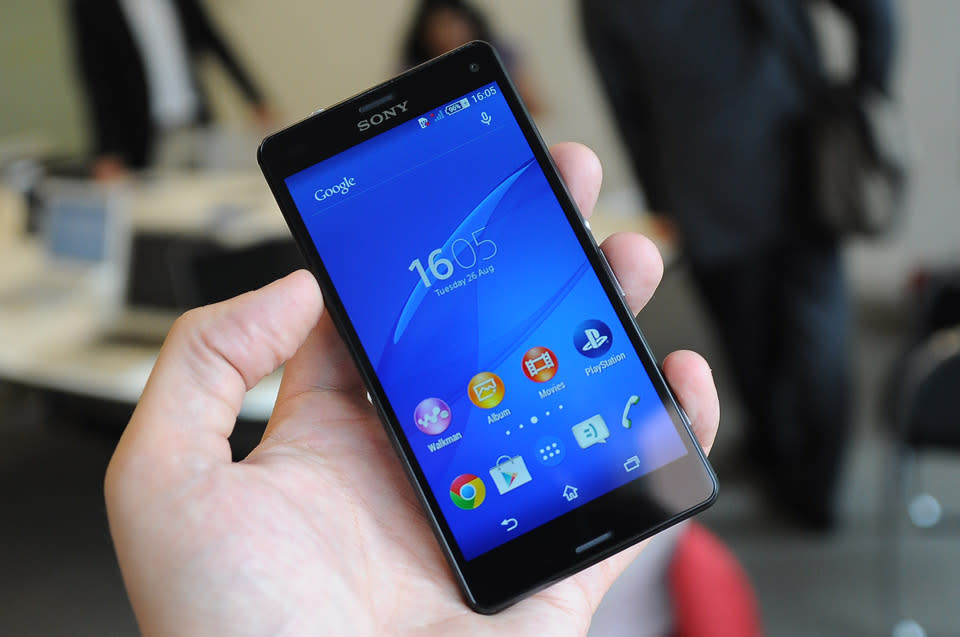 Miniature. Every phone maker is trying out the Mini Me approach these days, but most of them don't do it very well. Sony's one of the exceptions: Last year the manufacturer came out with the Xperia Z1 Compact, which was a smaller version of the flagship phone with almost the same specs. This is a big deal, because more often than not, "mini" models don't get the same stellar treatment as their bigger siblings. Fortunately, the first Compact must have done well enough for Sony to give the concept a second walk around the block; enter the Xperia Z3 Compact, which debuted today at IFA 2014 in Berlin. To be clear, the Z3 Compact isn't an exact, shrunken-down replica of the Xperia Z3 -- also announced at today's show -- but it's still much closer than any other manufacturer has been. It uses a 4.6-inch, 720p screen instead of a 5.2-inch, 1080p option; Sony claims that phones this small don't really need such high resolution, so this is clearly an optimal way for it to cut costs. (My first impressions of the screen are quite lovely; the lower resolution didn't negatively affect my initial experience, albeit it was in a brightly lit press booth.) Additionally, it has a smaller battery as a result of the smaller size, but 2,600mAh is still nothing to balk at -- especially given the lower resolution won't be much of a battery burden.

It also comes lined with a "liquid reflection" frame (which sounds like something you'd get at a bar after a long day at work). The frame uses translucent plastic on the sides instead of aluminum; and although I'm always a fan of phones that feature metal frames, the plastic feels extremely solid and the translucence simply looks pretty cool.

But those differences aside, the Compact has nearly everything else. It comes with the same IP68 waterproof rating, Snapdragon 801 chipset, 20.7MP ExmorRS rear camera sensor, 2.2MP front-facing camera, 16GB internal storage and microSD card slot (though the Z3 supports up to 128GB, whereas the Compact is 64GB). As you might expect, the smaller body and svelte 8.6mm profile make it quite easy to hold, and the slight curves on the side bubble out to offer a solid grip without the feeling of the corners or edges being too sharp for comfort. It comes with a hardware camera shutter button on the lower right, just below the volume button and power key; the volume control is in a rather awkward spot, however, as it's the exact place I like to keep my grip, so it may likely result in more accidental presses for anyone with similar preferences. Over on the left, you'll find the nano-SIM slot, microSD reader and micro-USB charger, and the 3.5mm headphone jack is on top.

The Compact will come in several colors when it gets released this fall: white, black, green and orange, with the latter two being much more sporty than the Z3's options. All told, I'm actually a bit more excited to use this phone than the Z3 itself, though both are rather tempting offerings; but there are still plenty of people who prefer a smaller size, but don't want to sacrifice flagship components to get it. Fortunately, although Sony's option isn't a perfect replica of its big brother, it's at least the best compromise for a "mini" smartphone that we've seen so far.

Dan Cooper and Jamie Rigg contributed to this post.

In this article: hands-on, ifa2014, mobilepostcross, sonyz3compact, z3compact
All products recommended by Engadget are selected by our editorial team, independent of our parent company. Some of our stories include affiliate links. If you buy something through one of these links, we may earn an affiliate commission.