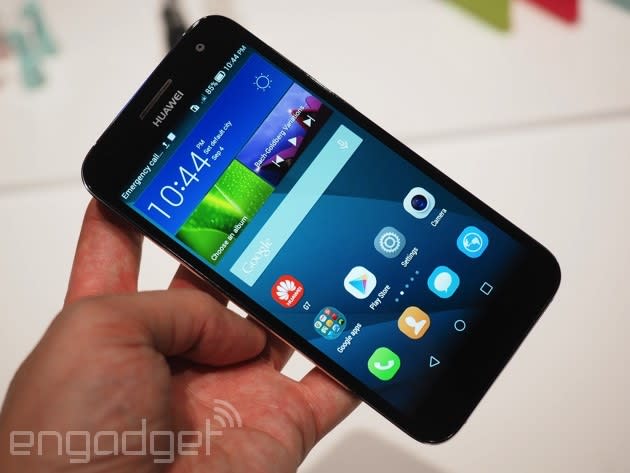 Huawei's supersized flagship may've taken center stage at the company's IFA press conference, but there was still plenty of love in reserve for another new addition to its product range: the Ascend G7. It also caters to those who like their screens big, and the spec sheet is nothing to shrug at. Build quality has been awarded particular priority, with most of the phone constructed from a single piece of metal, and the imaging experience has been carefully considered too. It's not exactly cheap at €299 (almost $390 converted), however, which may leave some wondering where exactly the G7 fits in.

The G7 doesn't command as large of a footprint as Huawei's new Ascend Mate 7, but it's not far behind with a 5.5-inch, 720p display. At that size, you'd usually expect a full HD panel, but it's one of several compromises for the sake of using more premium components elsewhere. Although the G7 doesn't have quite the asking price of a flagship, Huawei wanted it to look like a flagship. Aside from two panels around the camera lens and speaker grille on the back of the handset, everything but the face is made from one piece of metal.

The problem is that the quality of material isn't backed up by any kind of inspired design like, say, HTC's One and One M8. To reuse the old adage, it's just a square with rounded corners. The panel around the display sports a subtle dotted effect (similar to the ceramic back of the Ascend P7 Sapphire Edition), but that pleasant touch still doesn't push the overall look of the device above average. It comes in three styles: One has a white face, silver metal and white detailing around the camera and speaker; the others both have black faces, with either solid charcoal or golden backs. I might have warmed to the metal unibody a little more, if it wasn't so uncomfortable in the hand. The edges of the device are sharp -- painfully sharp. At 7.6mm thick and weighing 165g, I expected it to be relatively hand-friendly despite the large screen. When you get up to that almost awkward size, though, you need to apply slightly more pressure to your grip than you would with a smaller phone. This exacerbated the problem, and when I was done taking pictures of the G7, I was happy to put it down after handling it for all of five minutes.

Thus, I'm not sure using a solid metal block was the right choice here, even if it looks high-end. The money you'd spend on a G7 does go toward other things, though, like the 13-megapixel main camera with a Sony BSI sensor and 28mm lens. There are all kinds of imaging tricks the G7 can do, like after-the-shot refocusing and live "beautification" when recording video. Selfie addicts will also appreciate the 5-megapixel front-facing camera with 88-degree, wide-angle lens. The camera experience is clearly one of the handset's strong points, but there's also Cat4 LTE (up to 150 Mbps download speeds), 2GB of RAM, 16GB of expandable storage and a sizable 3,000mAh battery. The only other blip on the spec sheet, aside from the 720p display, is the 1.2GHz quad-core Qualcomm chipset, but it'll likely do the trick for everyone but the most demanding. The Ascend G7 is positioned as a sub-flagship phone, remember, and I'd be way more worried about how comfortable it is to use than the clock speed of the processor.

The handset is launching this month for a recommended price of €299 in several European countries (Germany, Italy, Spain, Denmark, Hungary, The Netherlands, Poland, Norway), as well as Turkey, South Africa and Mexico. It's also due to hit other regions in the future, though it's not clear exactly where or when.

In this article: ascendg7, hands-on, huawei, huaweiascendg7, ifa, ifa2014, mobilepostcross
All products recommended by Engadget are selected by our editorial team, independent of our parent company. Some of our stories include affiliate links. If you buy something through one of these links, we may earn an affiliate commission.