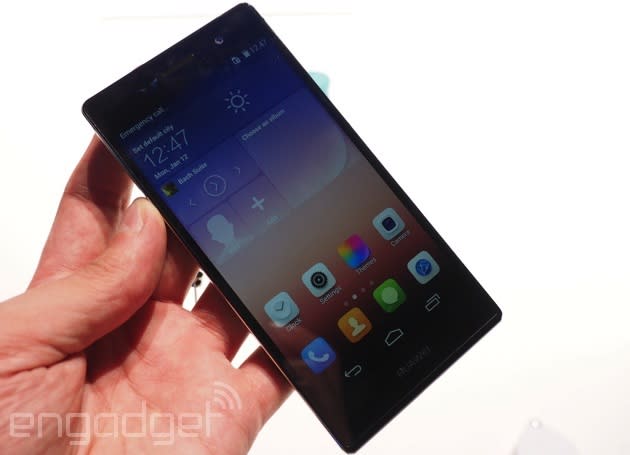 Huawei's a smartphone manufacturer that likes to stay very much on trend. At IFA this year, it unveiled the latest device in its large-screen Ascend Mate series, which includes a fingerprint sensor akin to that of the HTC One Max and iPhone 5s. While that handset was very much the star of the show, Huawei also brought the new Ascend P7 Sapphire Edition along for the world's press to check out, and it's the first time we've seen it in the flesh since hearing about it late last month. Sapphire looks set to become the new buzzwordy feature of next-generation phones, and Huawei's making sure it's quick out of the gate. We know full well what's inside the new P7 edition and how it's likely to perform, which left us plenty of time to drool over the new premium look that'll turn heads and take a serious beating. Huawei's given the Sapphire Edition almost a complete makeover. For starters, the glass on the front (if you haven't cottoned on by now) is made from super-strong sapphire. We already know how much punishment sapphire glass can laugh off with no visible damage, but we gave the P7 a brief thrashing regardless. Luckily, Huawei had tethered a few small penknives to the demo area for just this purpose (they were also handy for keeping other rabid journalists from getting snatchy). The glass shrugged off every attack easily, though we didn't expect much else -- you wouldn't exactly include knives in the demo area if you weren't 100 percent sure your device could handle them.

It's not just the front that's been toughened up, either, as the back panel is no longer bog-standard glass, but ceramic. Not only is the material more durable, but also its bubble-like patterning adds some extra, pleasing detail. The aluminum band that runs around the top and sides of the device has also been re-skinned in a soft rose gold color. It's almost too decadent given the phone would be just as happy in a toolbox as a jean pocket, but it looks great against the deep black of the rest of the handset. So, not only has the P7 been treated to more premium materials on the front and back, but also the whole package looks like a much superior version of the original. The only thing that gives away the smartphone's roots is the bare, curved plastic on the bottom edge of the handset. It doesn't do much to taint its overall appeal, however. Huawei's releasing a limited quantity of Sapphire Edition devices in China later this month, and while the exact price remains a mystery, it'll definitely be more expensive than the standard P7 (duh!). The firm's CEO Richard Yu told us discussions with global distribution partners are ongoing, so it is possible we could see a wider rollout in the future, but that scenario is still far from a lock.

In this article: ascendp7, ascendp7sapphireedition, hands-on, huawei, huaweiascendp7, huaweiascendp7sapphireedition, ifa, ifa2014, mobilepostcross, sapphire
All products recommended by Engadget are selected by our editorial team, independent of our parent company. Some of our stories include affiliate links. If you buy something through one of these links, we may earn an affiliate commission.