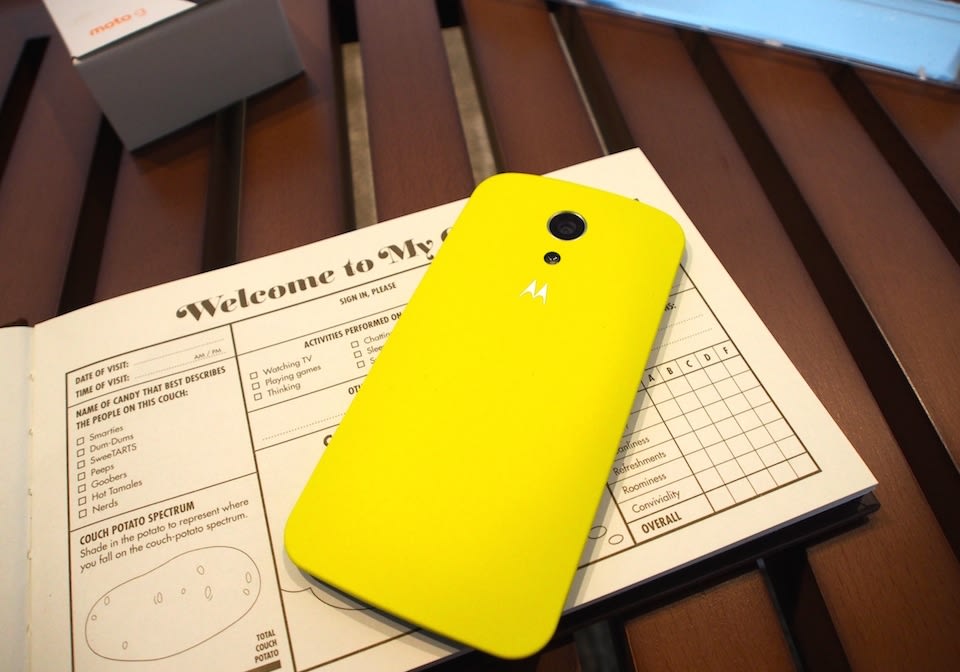 Along with the new Moto X, Motorola also unveiled a new Moto G today. And yes, Motorola apparently doesn't like renaming things, because it doesn't have a new one -- it's still simply the Moto G. And seeing as this humble device was the company's best-selling smartphone of all time, it certainly behooves it to keep it as identifiable as possible. Indeed, the new Moto G will even retail at the same exact price: $179.99 (£144.99) unlocked.

But never fear: while the incredible price remains the same, the specifications haven't. It now has a much bigger display -- a 5.0-inch 720p HD IPS display made out of Corning Gorilla Glass. As a result, the overall phone is also slightly larger, measuring 70.7 mm wide and 141.5mm long. In my handling of the Moto G, it still felt nice and comfortable to hold -- the curved back maxes out to 11mm. Still, its increased heft doesn't hold a candle to the relatively svelte X I had played with just before. From what I saw, the display looks good, given the G's entry-level status.

Other improvements to the G include two front stereo speakers for supposedly better sound compared to the single rear-ported one on the original, an 8-megapixel rear camera and a 2-megapixel front-facing one. Most notably, the G will also now finally ship with a microSD card slot, which is located underneath the back cover. It'll still come with 8GB or 16GB of built-in storage, but an expandable memory slot is nice for all those extra photos (it'll support up to 32GB cards). The 2,070 mAh battery is the same as before, which is a little worrying -- the original G had only average battery life. We'll see if the new G's larger display hurts it come review time.

Underneath it all is the same processor (a 1.2GHz Snapdragon 400) and from my initial playtime the G still handled smoothly. Well, aside from a noticeable shutter lag when taking photos. The photos themselves weren't terribly impressive, either, but at least now you can use volume buttons to take photos -- I guess that's a new feature compared to last year's model. 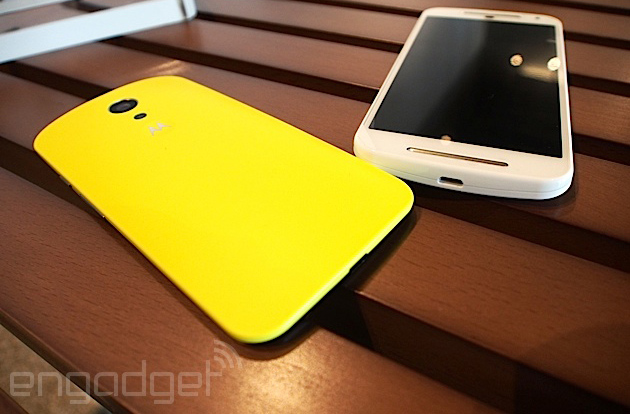 The new Moto G runs on Android without any custom skins, which is great news for Android purists. It'll ship with Android 4.4 KitKat and is upgradeable to Android L whenever that's released. It does come with a few Motorola apps like Migrate, which helps you transfer old phone contacts to the new one, and Assist, which provides a voice-activated Drive Mode when you're on the road. And as always, you can customize the G to your heart's desire with a variety of different color shells, though you sadly won't get the leather options that the X gets. But at this price, we can hardly complain about that.

Perhaps the best thing about the all-new Moto G is that, as we said above, it's priced the same as its predecessor at $179.99 (£144.99) off contract. It'll be available starting today in the US, India, France, UK, Brazil, Spain and Germany.

In this article: mobilepostcross, motog, motorola
All products recommended by Engadget are selected by our editorial team, independent of our parent company. Some of our stories include affiliate links. If you buy something through one of these links, we may earn an affiliate commission.