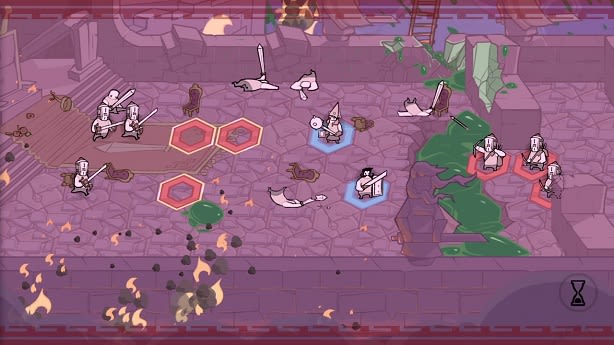 The Behemoth, better known as the house that made Castle Crashers, is continuing a pattern in which it approaches new genres with each project. Its newest venture, Game 4, is a turn-based strategy game for PC and Xbox One that retains the developer's quirky humor and trademark charms while stripping away some of the expected tropes found in the genre. In it, players collect a team of interchangeable, oddball heroes wielding the strangest weapons and helmets, then select their movement paths on the battlefield and observe as attacks play out. It's an intriguing direction for a studio that made its biggest mark with a beat-em-up.

The Behemoth built 13 arcade cabinets specifically to show off Game 4 at PAX Prime in Seattle this past weekend, and the cabinets did an admirable job of demonstrating the game's unique take on the strategy genre: speed and simplicity. Players don't select their squad's moves and targets in some drawn-out fashion like other turn-based, tactical games. Rather, the game accounts for the placement of characters on the playing field and dictates the outcome of each turn. Early in the demo, archers target those closest to them, so placing a soldier capable of shielding their teammates in front becomes an immediate strategy worth adopting.

Game 4 will be the first game from the studio since April 2013's Battleblock Theater, a platformer that itself broke a five-year absence for the developer since Castle Crashers launched in 2008. As production on Battleblock wrapped, The Behemoth began work on its spin on the strategy genre, rather than jumping back to its catalog to provide players with a sequel for one of its beloved games. As co-founder Dan Paladin told Joystiq at PAX, it's not quite in the developer's DNA to re-tread familiar turf, be it the same genre or through a sequel for one of its games, as attractive as the idea may be.

"When I think about it in chronological terms, there were lots of people who wanted Alien Hominid 2. If we made Alien Hominid 2, there'd be no Castle Crashers to want a '2' of," Paladin said, noting that he "wouldn't mind" creating another Alien Hominid game. As for Castle Crashers, he wasn't sure how the studio could continue to impact the beat-em-up genre, saying The Behemoth "kind of did what we thought it should be" with the popular game.

A second Castle Crashers game would almost certainly make the studio a fair amount of money; Paladin said the beat-em-up has "at least four or five million players." It's a mighty turnaround from The Behemoth's early days, in which it made "no money" in the first five years, according to the co-founder. "We were just fighting to survive. Xbox Live Arcade saved us," he added, referring to the "solid" reception of Alien Hominid HD in 2004, leading up to The Behemoth using "everything we had to make Castle Crashers."

"Then for some reason with Castle Crashers, it sells as much now as it did when it was new," he said. "And it doesn't make any mathematical sense to me." Success is a strange thing to define, though Paladin reaffirmed that each of the developer's games are successful in his eyes, and chooses to not put the sales of each game side-by-side.

"I always tell my guys this too, it's a really bad thing to compare any of our other games to Castle Crashers, because there's some kind of magic in that game that it's just going to do so well that it's going to be hard for any of our other games to sell as many copies," Paladin said. "Battleblock sold over a million copies, and that's awesome, that's huge. And if you compare it to Castle Crashers, it doesn't seem like a success in comparison." 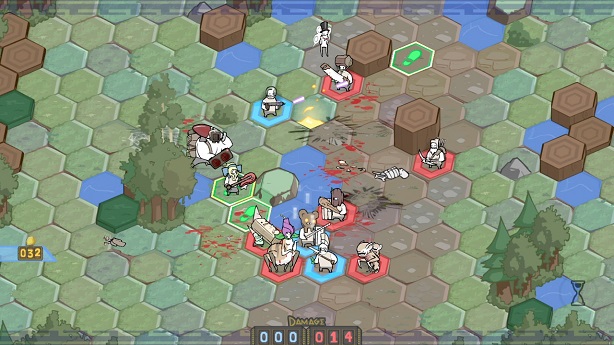 The aspiring-filmmaker-turned-game-designer may have called himself a "bad businessman" multiple times during the conversation, yet there aren't many independent studios with the type of floor space allotted to The Behemoth a large, annual gaming festival. "I think that if you think about the business and you're purposely creating a game based off of that exclusively, you'll fail because you're not thinking about the end user experience," he said. "You're thinking about how much money you might make, or something stupid like that." Paladin stressed that if creators "do it for the right reasons, it shows in the game and people react to it and they can tell," and that "the universe is just going to reward you if you do the right thing."

Creating a sequel or revisiting a genre isn't a creatively bankrupt idea by nature, of course, and it's one Paladin contemplated with Alien Hominid. "I wouldn't mind doing another one, because I think we could make it really nice," he said. "But at the same time, I'm not sure if that's what I want to go for, because I love exploring new universes and having brand new stuff to do." Ultimately, Paladin is "trying to see how far we can get before we revisit a genre or do a sequel."

There is some business sense to the order of The Behemoth's catalog, however; Paladin couldn't predict success for the developer if it had decided to lead with a strategy game like Game 4. "If we started with this kind of game, maybe I wouldn't be talking to you right now. But we finally have enough clout that we can get away with a sort of more niche genre," he said, admitting that he was "terrified" of showing it at PAX, but happy with the early feedback. "I'm so proud of the game and I think the game is solid, but the genre is not the most popular genre in the world."

Being a known commodity among the gaming community might allow The Behemoth to get away with moving its older games to next-gen consoles as well, something Paladin said he wants to do. "Now that there's next-gen, now we've gotta move all of our older games back onto all those things," he said, explaining that if he's "going to bring Castle to another system," he wants it "to be better."


For now, The Behemoth will continue picking new genres to craft fresh experiences from, each birthed from a myriad of internal prototypes. "I'm excited about that because, you know, I could make a dating game," he joked. "I have no reservations about any genre." Paladin could see the studio making a 3D game or even a first-person game in the future. "There have been prototypes that have resurfaced because they're cool. They just haven't been the one to pick yet," he said. He also admitted his distaste for platformers and turn-based games, and in each case asked himself, "What don't I like about them? What could I do to like them? What could I change?" For Game 4, he wanted "the mechanics to be simple, but the strategy to be deep."

"Honestly, we don't really have a secret," Paladin said of The Behemoth's independent direction. He described the staff as a group of artists and programmers that were "so tired of losing our jobs to stuff that was outside of our control," stuck working on someone else's projects.

"It's weird, it's just such a dream come true. It's almost kind of strange, because to me it doesn't feel like work. It almost feels like I don't deserve it because I'm just having fun," Paladin laughed, noting that once "it started to feel like I was just having fun, that's when I became successful."
[Images: The Behemoth]
In this article: alien-hominid, battleblock-theater, castle-crashers, Dan-Paladin, development, game-4, gameplay-trailer, indie, pax, pax-prime, pax-prime-2014, recommended, screenshots, sequels, strategy, teaser, The-Behemoth, the-behemoth-game-4, trailer, video
All products recommended by Engadget are selected by our editorial team, independent of our parent company. Some of our stories include affiliate links. If you buy something through one of these links, we may earn an affiliate commission.