The best Engadget stories of 2017 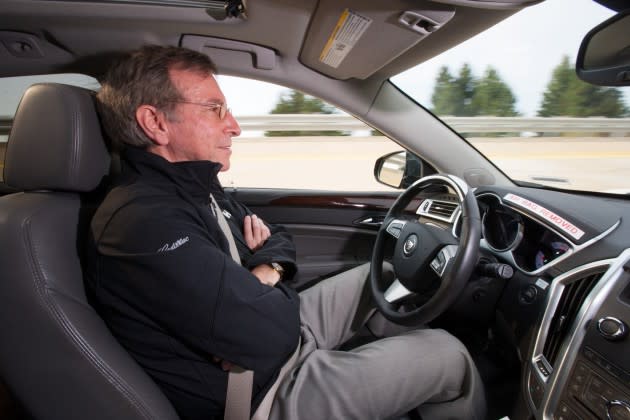 We've talked a lot about autonomous driving developments like Google's self-driving car, but today in Detroit GM CEO Mary Barra is announcing her company's push to put similar technology in cars we can actually buy. Two years from now, Cadillac will launch an all-new car with its "Super Cruise" technology that not only holds your speed, but uses sensors to keep it in the middle of the lane, and can brake if necessary. We've ridden in a demo vehicle that could even steer to avoid obstacles, but what's coming is more limited (likely because of legal and insurance questions that have yet to be answered), and says it will provide comfort to "an attentive driver" -- hopefully with enough leeway for us to snap an in-traffic selfie or two. GM's other big news is that the 2017 Cadillac CTS is the first one announced with "vehicle to vehicle" (V2V) technology to go along with its 4G LTE data connection. That means it can send and receive info from other cars or sensors mounted along the road to notify the driver of events that they might not be able to see (a car that suddenly brakes three cars ahead, or if one detects hazards like a pothole or black ice). Meanwhile, across the Metro Detroit area several highways will be equipped with cameras and sensors to collect data that's sent directly to V2V and vehicle to infrastructure (V2I) cars. The Michigan Department of Transportation is working with the University of Michigan, GM and Ford to roll out the tech along 120 miles of roads (I-96 from Brighton to St. Clair Shores, I-94 from Port Huron to Ann Arbor and US-23 from Ann Arbor to I-96), with a goal of "zero deaths on the road system," according to State Transportation Director Kirk Steudle.

So how does it all work? GM says its vehicle to vehicle tech sends out information like "here I am, here's how fast I am going" 10 times per second on the 5.9GHz wireless band. The car that receives the information can then use its safety tech like active collision warning or just alert the driver to what's going on. Before it debuts though, the National Highway Traffic Safety Administration (NHTSA) will need to finalize the protocol so that the different automakers are all on the same page, and a standard for security protections will need to be laid out.

For Super Cruise, there are still more questions than answers. The demo we experienced last year (similar to Autoblog's video, embedded above) was impressive, but actually rolling it out faces a number of hurdles. For now, GM is compromising by limiting it to certain locations (closed access roads, i.e. highways, where you won't regularly encounter pedestrians, cyclists or other elements), and on what it can do. It can keep the car in the lane, driving at a preset speed while responding to changes in traffic, and it will let the driver take their hands off of the wheel and feet off of the pedals, but it's not clear for how long. Right now, that makes it work well for handling your road trip through the boonies, or when you're busy yelling at the other drivers in a bumper-to-bumper traffic jam. In her speech, Barra will namecheck the "Boss" autonomous Chevy Tahoe that GM and Carnegie Mellon developed to win the DARPA Urban Challenge in '07, but says that developing a fully automated vehicle may take until the next decade. Super Cruise It will still require an attentive driver, although right now it's not clear exactly what that means. The car could use eye- or head-tracking tech to make sure the driver is paying attention, and a recent rumor from Financial Times tied the company to an Australian group, Seeing Machines, that does just that. So which car will be the one to debut Super Cruise? GM isn't giving any hints, but rumors have pointed to a new flagship full-size rear wheel drive model on the way called the LTS. It could be based on the Elmiraj coupe concept GM showed off in 2013 (above), and would be perfect to introduce the new technology. Other possibilities include crossover vehicles bigger or smaller than the current SRX, or an entry-level sedan that competes with the Audi A3 or Mercedes-Benz CLA that appeals to younger drivers. GM CEO Mary Barra has a tough road ahead to recover from the embarrassing and dangerous ignition switch problems which recently came to light, and focusing on new tech could help do that. GM's referencing its long history of working on intelligent and connected cars, reaching back to the 1956 Firebird II concept that dreamed of a car that connected to the road with a metal strip, drove itself, and had a communication system to talk to other cars or just watch TV. This week at the ITS World Conference in Detroit we'll see demonstrations of connected and autonomous cars from a number of automakers, with GM bringing a self-driving version of its EN-V 2.0 electric car and an Opel Insignia concept that can drive itself at low speeds, through the city, or on highways.

In this article: 2017, autonomous vehicles, cts, gm, its2014, self-driving car, supercruise, v2i, v2v, video
All products recommended by Engadget are selected by our editorial team, independent of our parent company. Some of our stories include affiliate links. If you buy something through one of these links, we may earn an affiliate commission.