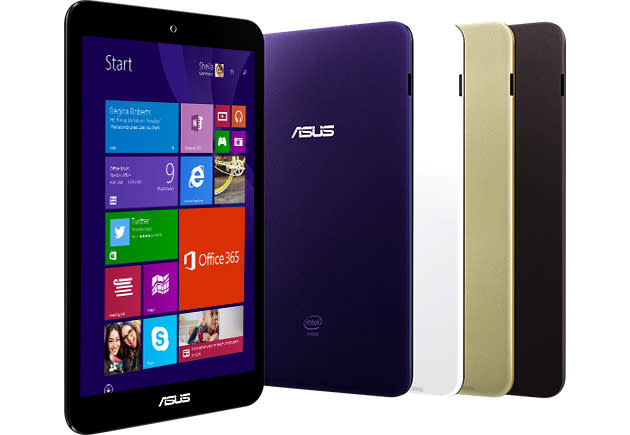 If you've wanted an affordable 8-inch Windows tablet from ASUS, your only recent option has been the VivoTab Note 8. While that's no doubt a fine machine, you might not want to pay extra for pen input if you don't need it. Thankfully, you don't have to any more; ASUS has quietly launched the VivoTab 8, a close cousin to the Note 8 that drops the stylus and digitizer. In many ways, it's now a MeMO Pad 8 running Microsoft's software instead of Google's. You'll still find a 1.33GHz Atom processor, a 1,280 x 800 display and a 2-megapixel front camera, but a few things have switched up to accommodate Windows while keeping the price in check. The newer slate has a larger 32GB of expandable storage and ships with 2GB of RAM in some regions instead of the MeMO Pad's 1GB, but it drops back to a 2-megapixel rear cam -- sorry, you won't be capturing any photographic masterpieces here. ASUS hasn't revealed any launch plans yet. However, it's safe to presume that the VivoTab 8 will save you at least some cash versus the Note 8's original $330 sticker.

In this article: asus, baytrail, m81c, tablet, vivotab8, windows, windows8.1
All products recommended by Engadget are selected by our editorial team, independent of our parent company. Some of our stories include affiliate links. If you buy something through one of these links, we may earn an affiliate commission.