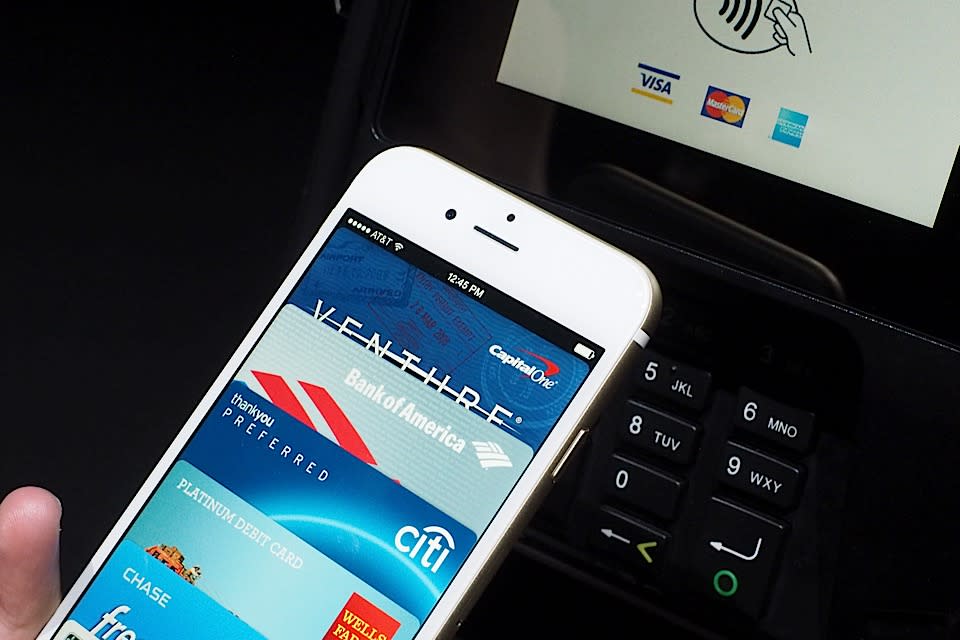 Rumors of Apple working on a wireless payment service have been droning on for years, so when the company introduced a mobile wallet-like feature called Passbook more than two years ago, it seemed at the time that such a service was inevitable in the very near future -- perhaps the iPhone 5 would have it? It took a while, but come October Apple will be ready to utilize the Near-Field Communications chip built inside the new iPhone 6, iPhone 6 Plus and Apple Watch. The service, simply known as Apple Pay, wants to do exactly what every other payment service on the planet wants to do: Make it possible for you to ditch your wallet (aside from Driver's Licenses and other forms of ID).

Much like any other mobile payment service, such as Google Wallet or Softcard (formerly Isis), a lot of Apple Pay's success will come down to how many people actually use it. The hardware is definitely there; fingerprint scanning through Touch ID is an integral part of the feature, and NFC is now built into the new iPhones. Users will probably find it faster and easier than putting in a PIN code to make payments. Apple's solution could certainly do better than its competitors, but it's going to take a while for enough people to have the proper hardware in-hand -- and it'll take time to persuade users that the company isn't solely out to get their personal information or make it easy for hackers to do the same.

Apple insists that this isn't the case, that it's using a Secure Element chip that encrypts user data in such a way that prevents the company and probing eyes from getting ahold of it. Instead, the only parties that can see your transaction details are the banks, credit card companies and/or merchants that are directly involved in the purchase. According to Apple, a unique device number is "assigned, encrypted and securely stored" to each phone, rather than the actual credit card number; each individual transaction features a one-time dynamic security code number as well.

As we expected, Passbook is the central point for Apple Pay on the iPhone where your credit cards and accounts reside. This is where you set everything up on the phone (whether you manually add the info or use the camera to take an image of your card), but when it comes to actually making the payment, it's simply a matter of holding the device within an inch of any payment terminal that supports NFC contactless payments (a lot of merchants now offer these stations in stores), holding your finger onto Touch ID for a fingerprint scan, and presto -- the payment's gone through, and you receive a notification telling you how much you just spent. The same goes for online checkouts through e-commerce sites: When it comes time to pay up, you just need to use Touch ID. (If you don't want to use the default credit card, you need to go into Passbook to use it.)

The video above shows how Apple Pay is supposed to work. It's quick, because the whole process -- if done right -- only takes a matter of a few seconds. In theory, faster than it takes to pull your wallet out, swipe your card, add your PIN or use your signature. As mentioned before, this isn't a brand new idea. But as long as Apple is able to persuade enough people to trust the service and use it on a regular basis, it has a better chance of succeeding than any service we've seen before -- that is, as long as the public is ready to move their trust away from magnetic stripes and onto Cupertino's vision.

Once the service is ready to go in October, it'll become available as an iOS update in the US. There's no word on when we can expect it in other countries, but since this is a brand new service, it's quite likely that the US is going to be a testing ground to make sure any and all bugs are worked out before opening it up to international merchants. It'll start out with support from Wells Fargo, Amex, Visa, Mastercard, Chase Bank, BoA, CapitalOne and Citi; Apple claims 220,000 merchants will be onboard at the beginning as well.

In this article: apple, applepay, hands-on, iphone, iphone6, mobilepostcross, nfc, video
All products recommended by Engadget are selected by our editorial team, independent of our parent company. Some of our stories include affiliate links. If you buy something through one of these links, we may earn an affiliate commission.