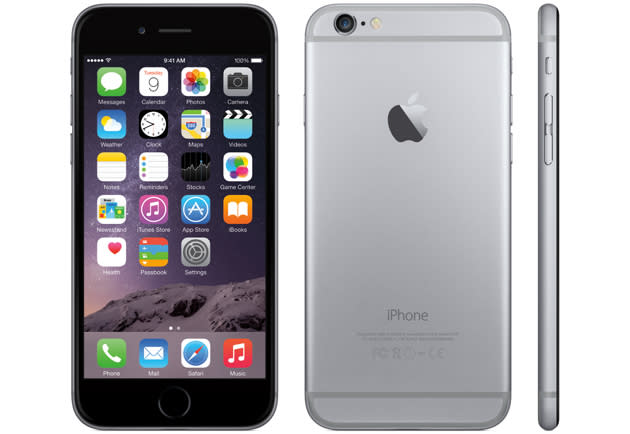 You were expecting it, and here it is: Apple has unveiled the smaller of its two new super-sized smartphones, the 4.7-inch iPhone 6. As the leaks suggested, it centers around a larger (by 0.7 inch) 1,334 x 750 Retina HD display in a body that is decidedly slimmer and curvier than its already svelte 5s predecessor, at 6.9mm thick. It's not all about looks, though. The new handset is also running a beefier A8 chip that's claimed to be about 25 percent faster than the A7 you saw the last time around, even as it's up to 50 percent more efficient -- Apple estimates up to 14 hours of talk time, 11 hours of video and 10 days of standby. Not surprisingly, the iPhone 6 makes better use of advances in both wireless tech and sensors -- important to both Apple's iCloud upgrades and its newfound focus on health. You'll find 802.11ac WiFi and 150 Mbps LTE data; you can also make voice calls over both LTE and WiFi if your network supports either technology. The new M8 coprocessor can not only estimate distances all on its own, but also track air pressure to gauge your elevation (much like a few existing smartphones from Samsung and others). There's a next-gen gyroscope, too, so fitness apps and games should deliver more accurate results. And yes, there's short-range NFC built in to let you make secure mobile payments at retail stores using Apple Pay.

Photographers may not like that the rear camera is still stuck at eight megapixels, but Apple has rolled in DSLR-style phase detection to speed up focus and a new imaging chip with better noise reduction and improved color tones. You won't get optical image stabilization like you do on the larger iPhone 6 Plus. However, there are still quite a few features that should improve your day-to-day shooting. You can take high-dynamic range (HDR) photos in a single shot, record regular-speed 1080p video at up to 60 frames per second, and capture slow-motion clips at 240 frames per second instead of the previous 120. If you're fond of panoramas, you can stitch together pictures to create a whopping 43-megapixel image.

Apple will be selling its 4.7-inch hardware in the same colors (black, gold and white) as the 5s from last year. You'll get more storage for the money depending on how much you're willing to pay, however; $199 still gets you 16GB, but shelling out $299 and $399 will respectively offer 64GB and a hefty 128GB. Apple starts taking preorders for all iPhone 6 models on September 12th, and will release them on the 19th.

If you were hoping that Apple would keep a high-end 4-inch iPhone around for good measure, you're out of luck. Your only choice for a compact device now is to buy a price-cut previous model. In other words, large is the new normal -- Apple has joined the rest of the smartphone world by associating bigger screen sizes with most powerful devices. That'll likely be welcome if you've been holding off on an iPhone due to the small size, but you no longer have the choice of a pint-sized powerhouse that might be more comfortable for one-handed use.

In this article: a8, apple, applepay, ios, iphone, iphone6, iphoneevent2014, m8, mobilepostcross, nfc, poll, retinahddisplay, smartphone, TL16IFON, video, volte, wedgies, wificalling
All products recommended by Engadget are selected by our editorial team, independent of our parent company. Some of our stories include affiliate links. If you buy something through one of these links, we may earn an affiliate commission.