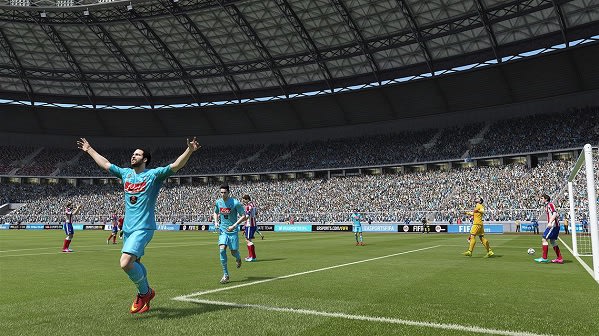 Like Lionel Messi or an overexcited baby, FIFA 15 is dribbling all over the place this week thanks to the arrival of its demo. Xbox Live Gold members can already take out EA's sim for a kickabout on Xbox One and Xbox 360 (free members can join in starting September 16) and it's also confirmed to be hitting PC later today. Going by PSN tradition, the demo should reach digital stores on PS4 and PS3 later today too. As ever, Euro PS owners have to wait until tomorrow.

The demo itself lets up to two players trial with eight club teams, including Liverpool, Chelsea, Manchester City, Borussia Dortmund, Barcelona, Boca Juniors, Napoli and Paris St. Germain. It also features a FIFA Ultimate Team demo for those who dream of dream teams. 5
As EA detailed at Gamescom, the new FIFA pledges to refine its gameplay with improved teammate reactions to other players and responsiveness to movements. It's also introducing new features like the Goal Decision System tech now being used in the English Premier League, and more realistic goalkeeper reactions such as saving while diving the wrong way. Also, fans of FIFA Ultimate Team can look forward to loaning players in this year's installment.

Not everything from last year's making it to the new entry, though. While the Turkish Super Lig comes back to FIFA 15 after a sabbatical, Brazilian clubs aren't included because of licensing issues. For last-gen players, the Pro Clubs mode is another returnee that's MIA.

The game proper launches for Xbox One, PS4, PS3, Xbox 360 and PC on September 23 in North America, September 25 in Europe and September 26 in UK. Legacy editions are also on the way to 3DS, Vita and Wii.
[Image: EA]
Source: Origin, EA
In this article: EA, EA-Canada, EA-Sports, fifa-15, microsoft, nintendo, origin, pc, playstation, ps3, ps4, psn, release-date, XBLM, xbox, xbox-games-store, xbox-one
All products recommended by Engadget are selected by our editorial team, independent of our parent company. Some of our stories include affiliate links. If you buy something through one of these links, we may earn an affiliate commission.