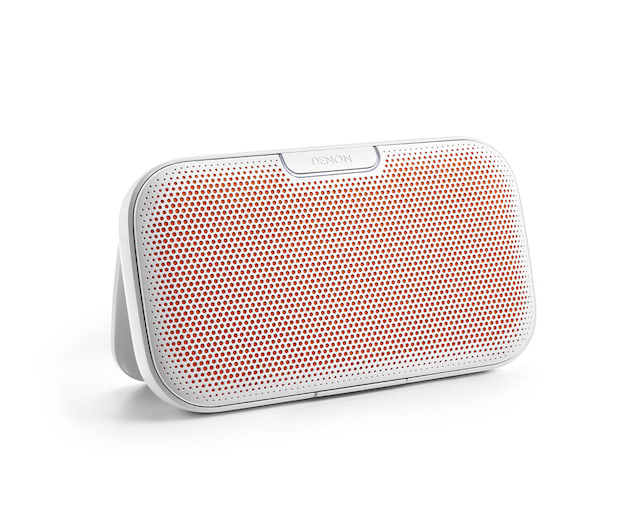 Denon is an audio company renowned for producing high-quality, high-end hi-fi equipment. The Envaya (US$199) represents Denon's current offering into the portable speaker market. Having recently reviewed Ultimate Ear's Boom and the pricier (compared to both the Boom and Envaya) Libratone Zipp, I was keen to see how the Envaya compared.

Where the Boom and Zipp are cylindrical, the Envaya takes a more traditional rectangular shape. It's fairly large compared to the Boom (width 25.5 cm x height 1.41 cm x depth 4.75 cm) and weighs just under 3 lbs, so it's not as large as the Zipp. Having said that, the Envaya could easily be carried around in-hand or slipped into a rucksack.

I wouldn't say the Envaya has an exciting, bold design like the Boom, or a sophisticated look like the Zipp, but it's not bad looking either. Similarly, it doesn't feel cheap, but it doesn't feel premium either. The Envaya comes in either black or white, but on the front is a grill with an interchangeable, colored cloth underneath. There are four colors (lunar, indigo, fandango, sunset) which do give the speaker some personality, but it's subtle. The Evanya may not stand out with its looks, but it's well put together and has a sturdy, durable quality.

There's a kickstand round the back that snaps out with a squeeze to stand the Envaya upright. The kickstand collapses with a satisfying click when you press down, to make it easier to transport or store. On top is a row of large, back-lit buttons (power on / off, pairing, mute, volume up / down, and aux) as well as a battery indicator light. On the right hand side is a power input, a 3.5mm aux input, a reset button and a USB port for charging your iOS device from the Envaya's battery. On the bottom is a rubbery grip, keeping the Envaya steady and stable.

Inside are what Denon calls two Full Range Drivers and in between them is a Passive Radiator for the bass, all driven by a digital amplifier.

Pairing the Envaya to my iPhone was really easy with Bluetooth. The Envaya chimes when pairing is complete and the Bluetooth pairing button's backlight is constantly on to indicate the connection. Multiple devices can be paired with the Envaya. I found the Envaya had really good Bluetooth range, too.

The first thing I noticed from the Envaya when I played a track through it was that it had oodles of bass. It was surprising just how much of a punch the Envaya had, especially compared to the Zipp, where I felt bass was slightly lacking. However, the extra bass comes at the expense of higher end detail and openness. Things tended to sound a little muffled in the upper ranges. The Envaya has loads of volume though, easily filling a good-sized room with music.

Denon says the Envaya has 10 hours of battery life and charges in 2.5 hours. I found the battery life to be on par with that, lasting a good few days with intermittent usage. The speaker's USB port for charging is a nice extra for those emergency low-battery moments, too.

For a portable speaker, the Envaya has a great deal of volume and bass oomph, making it a great choice for impromptu parties and the like. Battery life and Bluetooth performance are solid, and the USB charging port is a useful extra, but the veiled high-end left me wanting a little more from its audio performance. Having said that, if you're a bass-heavy fiend, the Envaya will be exactly what you're looking for in a portable speaker.

In this article: bluetooth, bluetooth speaker, denon, features, iOS, iPad, iPhone, iPod, Mac, portable speaker, portableaudio, review, wireless speaker
All products recommended by Engadget are selected by our editorial team, independent of our parent company. Some of our stories include affiliate links. If you buy something through one of these links, we may earn an affiliate commission.