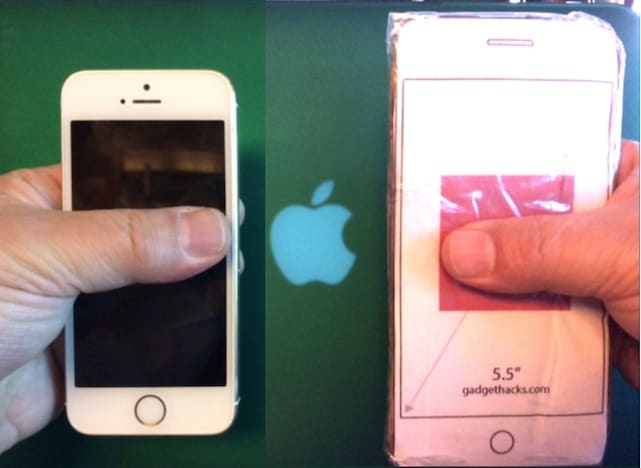 My wife pointed out a comment to me on a decidedly non-tech website she reads where a person commented on a blog post from last November where an "Apple Fanboi" tech blogger had exclaimed disbelief why anyone would want a large-screened phone. The commenter was irritated that the same writer was probably now standing in line for an iPhone 6 Plus. Fortunately, that tech blogger wasn't me, but it could have been.

Back in October of 2011, I wrote a post called "Size matters: Why the iPhone has a 3.5-inch screen" that quoted blogger Dustin Curtis -- who owned both an iPhone 4 and Samsung Galaxy S II -- talking about how perfect the iPhone was for one-handed use. Now fortunately, I never did make any disparaging comments about large-screened phones, but I did find that 2011 post and thought I'd revisit it now that Apple has gone big.

The gist of Curtis's comments was that the 3.5-inch iPhone screen size in vogue at that time was perfect for allowing a person holding a device in one hand, using a thumb to control just about anything on the screen. On the "huge" Galaxy S II with its 4.21-inch screen, that wasn't possible.

With my iPhone 5s and my iPhone 6 mockups on hand, I decided to see just how much of the screen I could reach with one thumb. Since I tend to move my iPhone 5s up and down with one hand while moving my thumb around, I can pretty much reach every part of the screen -- and I have really small hands for a man.

The iPhone 6 requires a bit more moving up and down, and I think I'd have issues one-handing things on the right-hand side of the screen when I'm holding it in my left hand and vice-versa. As for the iPhone 6 Plus, it's pretty much impossible to touch anything on the right-hand half-inch of the screen with my thumb when holding it in my left hand.

My next question to myself was "just how much one-handed work do I currently do with my iPhone?" The answer to that? Just about none. About the only time I one-hand the device is when some notification comes in and I pick it up with one hand -- with a thumb on the Touch ID Home button -- to take a look. When I need to do some work with it, the phone instinctively goes into my left hand and I start poking at it with the right.

Picking up the iPhone 6 Plus mockup, I found myself much more apt to use it two-handed, although notifications could still be perused one-handed. Now it's important to note that although the new iPhones are jumbo-sized, the devices will probably still have an edge over Android devices in terms of usability. To quote Apple on the topic:

By creating iPhone 6 and iOS 8 together, we optimized the software to enhance the physical design. iOS swipe gestures were designed to be more fluid across the seamless form, making it easy to navigate iPhone with one hand. With new features like Reachability you can interact with the larger screen in different ways, too. Simply double touch the Home button and the entire screen shifts down closer to your thumb. And to easily navigate Safari or Mail, swipe left to right across the screen to go backward, or swipe right to left to go forward. With the new continuous surface of iPhone, all your gestures now feel smoother than ever.

Now I'll have to wait about a week to see how "Reachability" works or if the iPhone 6 Plus ends up feeling way too big, but for the most part I think it's going to be usable. For my tired old eyes, I'm hoping the larger screen will make things easier to read and watch, and I'm using the device to replace two other Apple products -- an iPhone 5s and an iPad mini.

One final note on the topic of iPhone 6/6 Plus size. A reader pointed me to an absolutely ridiculous post on The Atlantic website that breathlessly exclaims that the size of the new iPhones is "too big for women's hands". Oddly enough, they have a picture of a woman happily using an iPad mini -- quite a bit larger than the iPhone 6 Plus -- at the top of the post. Not only does the author basically call Apple misogynist (after all, no women made presentations at the 9/9 event!), but he came up with one of the most inane comments I've seen as a sub-head in a while -- "As Apple starts designing for our bodies, it will have to account for the fact that they're not all the same size." Wow, I guess Jony Ive and crew never realized that, genius. Next time, let's hope that they come to you for ideas on how to design successful products...

In this article: iPhone, iphone 6, iphone 6 plus, opinion, screen size
All products recommended by Engadget are selected by our editorial team, independent of our parent company. Some of our stories include affiliate links. If you buy something through one of these links, we may earn an affiliate commission.