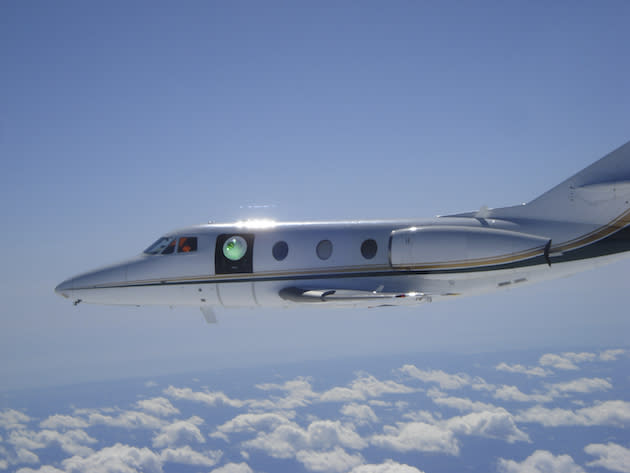 Lockheed Martin has an affinity for lasers -- that much is apparent. Not satisfied with simply having ground-based energy weapons, though, the outfit has recently tested its airplane-mounted death ray over the skies of America's High Five, Michigan. The Aero-optic Beam Control (or ABC, as its friends are fond of saying) was recently run through its paces to prove airworthiness, among other things. The kicker here is that the laser can rotate 360 degrees and eliminate targets from basically any direction. Yeah. Lockheed says that the turret's been designed to engage bogies at basically any position and there's tech in place to counterbalance any turbulence caused by the protruding sphere (pictured above). The trials aren't done just yet however, and they'll only increase in complexity to further prove the system's military-aircraft mettle as time wears on. So, you know, enjoy hiding out in your secret lair while it lasts.

In this article: Aerospace, airplanes, highenergylasers, lasers, lockheed martin, lockheedmartin, michigan, wargadget
All products recommended by Engadget are selected by our editorial team, independent of our parent company. Some of our stories include affiliate links. If you buy something through one of these links, we may earn an affiliate commission.