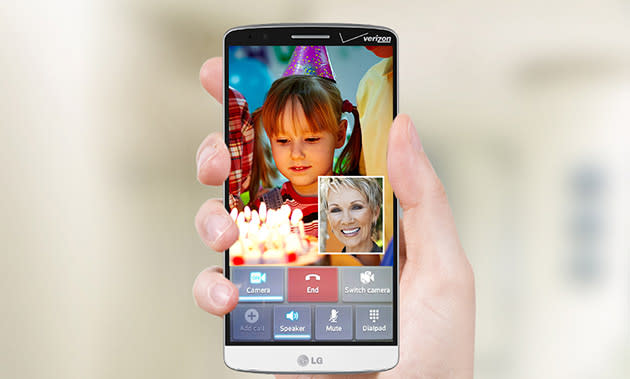 Verizon's HD voice and video chat feature is now live, just like it promised back in August. The carrier officially calls it "Advanced Calling 1.0," and it lets you make high-definition voice calls over LTE to other Verizon phones that also have the capability. Its video chat function, on the other hand, is a combination of HD voice and real-time video feed, though it can transfer the video portion of the call from LTE to Verizon WiFi when available. Anyone with a compatible device can access the feature at no additional charge, with HD voice costing the same as your standard call rates. Video, however, will be billed as data, with one minute eating up between six to eight MB.

As great as Advanced Calling sounds, you unfortunately can't use it all the time -- as we mentioned earlier, it only works if you and the person you're calling are both using Verizon phones with the capability. The bad news is, there are only two compatible devices right now (the Samsung Galaxy S5 and the LG G2), though the carrier promises to add more to the list over time. If you do have those phones, simply install the software update that recently rolled out to your devices and follow the instructions on the Advanced Calling page to change your settings and enable the feature.

In this article: advancedcalling, hdvoice, mobilepostcross, verizon, VoiceOverLte
All products recommended by Engadget are selected by our editorial team, independent of our parent company. Some of our stories include affiliate links. If you buy something through one of these links, we may earn an affiliate commission.