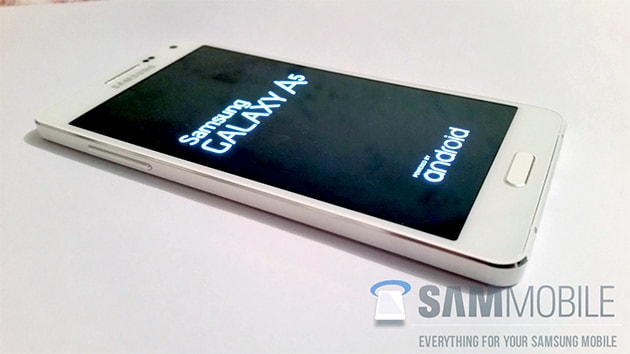 Samsung likes to get some mileage out of its lofty design themes and plenty of people have gone gaga over the Galaxy Alpha's subtle style, so it's no surprise that the phone's design DNA is being injected into other devices. SamMobile has been reporting for a while now that the Korea electronics giant has been working on a range of phones -- the so-called A series -- that feature some of the Alpha aesthetic, and now they've obtained images of the first one. It's called the Galaxy A5, and if these reports hold true it falls very firmly onto the middle of the road. There's a 5-inch Super AMOLED screen running at 720p up front, paired with a 13-megapixel rear camera and a Qualcomm Snapdragon 400 chipset ticking away within the minimalist frame that may or may not actually be made of metal. Yeah, we know, it's a bummer, but the more modest price tag that'll almost assuredly stick to it might make the change in materials worth it.

Source: SamMobile
In this article: android, galaxy, galaxyalpha, metal, samsung, smartphone
All products recommended by Engadget are selected by our editorial team, independent of our parent company. Some of our stories include affiliate links. If you buy something through one of these links, we may earn an affiliate commission.