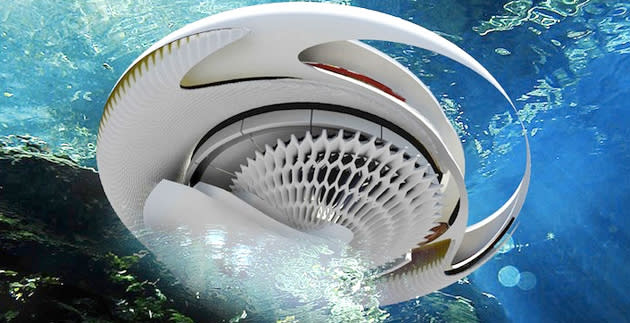 Salt water covers the vast majority of the Earth's surface, making it one of the most abundant and under-appreciated resources on the planet. Taking advantage of this resource, Nanoflowcell has developed the world's first saltwater-powered electric car! The vehicle, known as the Quant e-Sportlimousine, can accelerate from 0-62MPH in an impressive 2.8 seconds, and it just received approval for testing in Europe. In other green transportation news, designer Dominic Wilcox just unveiled a self-driving car with a bed inside -- so you can catch up on sleep while you commute to work! The real kicker? It's made from gorgeous panels of stained glass.

Meanwhile, the Arizona-based company Local Motors built the world's first 3D-printed car at the International Manufacturing Technology Show in Chicago. The car is made up of about 40 components (far fewer than the thousands of parts that go into a typical car), and it was printed and assembled in 44 hours. And if you've ever dreamt of keeping up with the fastest humans in history, DARPA has created a jetpack that can help you run a four-minute mile. The jetpack contains small turbines that propel its wearer forward, and it's intended to help soldiers who are weighed down with lots of equipment and gear, but are expected to move quickly over long distances.

Many homes these days are powered by solar panels, but few are powered by the ocean. Architect Margot Krasojević just unveiled designs for a futuristic hydroelectric house that is shaped like a spiky sea urchin. The tidal-powered home features an electromagnetic turbine system that uses neodymium magnets and copper wire coils to induce an electric current when the waves push and pull against the extruded chambers. In other clean energy news, Wildpoldsried, a Bavarian village of about 2,600 residents, produces 500 percent more energy than it needs from renewable sources. The tiny town makes a profit by selling the surplus power back to the grid. The NYC-based tech startup Volta Group has just installed its first EnGo public charging station, which powers mobile devices with a clean energy combo of kinetic tiles and solar panels in St. Louis. And speaking of photovoltaic panels, we just published a fun DIY that shows how to make your own solar power generator! The rise of wind energy is one of the biggest clean tech success stories of recent years, but animal lovers and conservationists worry that turbines are a major contributor to bird deaths. A massive study supported by the American Wind Wildlife Institute sheds some light on the situation -- wind turbines account for 214,000 to 368,000 bird deaths each year, while radio and cell tower collisions kill 6.8 million and cats kill up to 3.7 billion.

Buildings account for about 40 percent of US energy consumption, but new green building techniques are looking to make a dent in that. One super-efficient passive house in Wisconsin is able to stay warm using less energy than a typical hair dryer -- and that's especially important in a part of the country where it can get as cold as 30 degrees below zero in the winter. Another way to cut down on energy use is to just build smaller. A team of Chinese students recently unveiled a 43-square-foot house that fits a bed, a kitchen, a bathroom and storage space. The house will be made from prefabricated materials and mass-produced to provide affordable housing for cash-strapped students, migrant workers or even the homeless. And to achieve maximum relaxation while spending time in the outdoors, nothing beats a tree tent. A UK-based husband-and-wife team recently unveiled a set of colorful tree tents that look like a cross between a hammock, a tepee tent and a tiny tree house. In the world of interior design, 3D printing is starting to make its mark: The German company LimeMakers just unveiled a new line of 3D-printed products at this year's London Design Festival, including a fruit bowl, geometric lamps and vases. UK furniture designer Paul Kelley just unveiled magnetic modular furniture made from copper-clad cubes that be can reassembled in dozens of configurations. And if you think your office is a rat race, we've got the perfect desk for you: A giant human hamster wheel!

In this article: eco, environment, green, inhabitatsweekingreen, solar, transportation
All products recommended by Engadget are selected by our editorial team, independent of our parent company. Some of our stories include affiliate links. If you buy something through one of these links, we may earn an affiliate commission.