New reversible USB connectors will carry audio and video, too 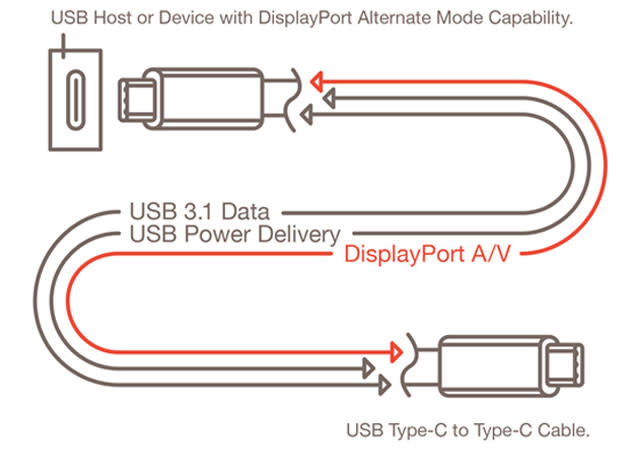 We've told you all about the upcoming USB cable's high-powered abilities, but now audio and video have joined the mix. Working alongside the USB 3.0 Promoter Group, the Video Electronics Standards Association (VESA) has leveraged a DisplayPort "Alt Mode" to sort full audio/video on monitors with resolutions of 4K and above with the Type-C tech. What's more, with the help of an adapter or converter cable, the new standard can be made to play nice with regular DisplayPort, HDMI, DVI and VGA jacks on existing displays. To wrangle video and sound, the alternate mode leverages a couple of the Type-C connector's so-called SuperSpeed lanes to deliver the goods to that external monitor -- leaving the others to data transfers alongside that 100 watts of power. Of course, DisplayPort tech has been available in Thunderbolt cables/jacks for some time, but the new USB kit looks to be "a single-cable solution" that's sure to clean up that mess of wires under your desk.

In this article: displayport, type-c, usb, USBType-C
All products recommended by Engadget are selected by our editorial team, independent of our parent company. Some of our stories include affiliate links. If you buy something through one of these links, we may earn an affiliate commission.