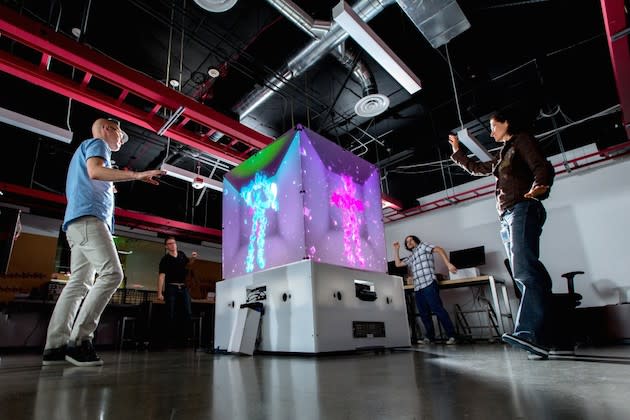 Third-party developers have grown very fond of building neat stuff with the Kinect, so it's no surprise that Microsoft itself would create projects using this technology. Enter the Cube, a five-sided, Kinect-powered box which can interact with people around it -- the company describes it as a "canvas for a new kind of creative expression" and a "technological sculpture that's a venue for new types of interactive art." You can dance, or make other random body gestures, in front of it and the Cube will project that image onto one of its panels, in a rather colorful way, no less; think of it as what you would see on a game like Just Dance, but minus the layer of flashy outfits. Microsoft's Cube isn't all about the Kinect, however. Inside, there are also five computers and five projectors which, paired alongside a total of four new Kinects, are what make the magic possible. You can watch the Cube in action after the break.

In this article: Cube, Kinect, Microsoft, Microsoft Cube, Microsoft Kinect, MicrosoftKinect, Xbox One Kinect
All products recommended by Engadget are selected by our editorial team, independent of our parent company. Some of our stories include affiliate links. If you buy something through one of these links, we may earn an affiliate commission.