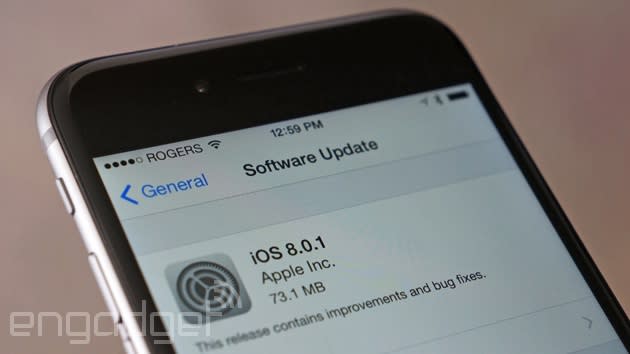 Went ahead and downloaded the newest, freshest version of iOS for that new iPhone 6? Then immediately regret doing so? Apple's released a statement saying that users who have lost carrier service or Touch ID functionality should reinstall the initial version of iOS 8, until version 8.0.2 is ready to go. The company says this will take a few more days. We've got the full statement after the break.

Update (9/25): That was quick! The new update is already out, find out more information here.

"We have a workaround for iPhone 6 and iPhone 6 Plus users who lost cellular service and Touch ID functionality today after updating to iOS 8.0.1. Affected users can reinstall iOS 8 through iTunes, for more information visit http://support.apple.com/kb/HT6487. We apologize for the great inconvenience experienced by users, and are working around the clock to prepare iOS 8.0.2 with a fix for the issue, and will release it as soon as it is ready in the next few days."

In this article: apple, iOS, ios8, ios801, iphone6, iphone6plus, mobilepostcross, update
All products recommended by Engadget are selected by our editorial team, independent of our parent company. Some of our stories include affiliate links. If you buy something through one of these links, we may earn an affiliate commission.