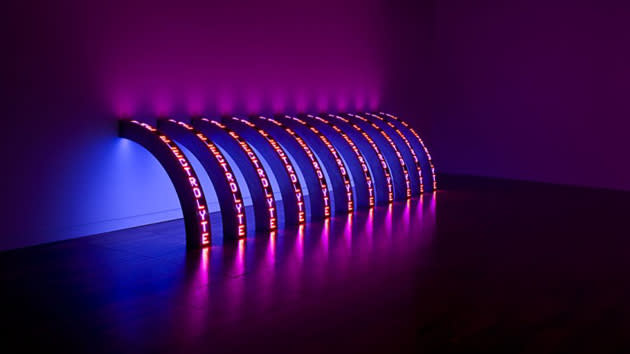 It's safe to say that surveillance technology had a profound effect on American culture, even before Edward Snowden's leaks arrived -- there's a sense that you can never really escape the government's eye. If you've ever shared that feeling, you'll be glad to hear that there's finally an art exhibition devoted to exploring high-tech monitoring. The Scottsdale Museum of Contemporary Art's newly opened Covert Operations is full of projects that not only protest data collection, but sometimes use it to drive their points home. Jenny Holzer's Ribs (above) streams real US government documents on its LED displays. Hasan Elahi's Tracking Transience, meanwhile, uses selections from an online collection of 70,000-plus photos and location info as a sort of challenge; he wants you to mimic an FBI agent trying to piece together his life. If you're interested in seeing any of these projects first-hand, you'll want to swing by the Arizona-based museum no later than January 11th.

In this article: art, data, espionage, exhibit, exhibition, spying, surveillance
All products recommended by Engadget are selected by our editorial team, independent of our parent company. Some of our stories include affiliate links. If you buy something through one of these links, we may earn an affiliate commission.