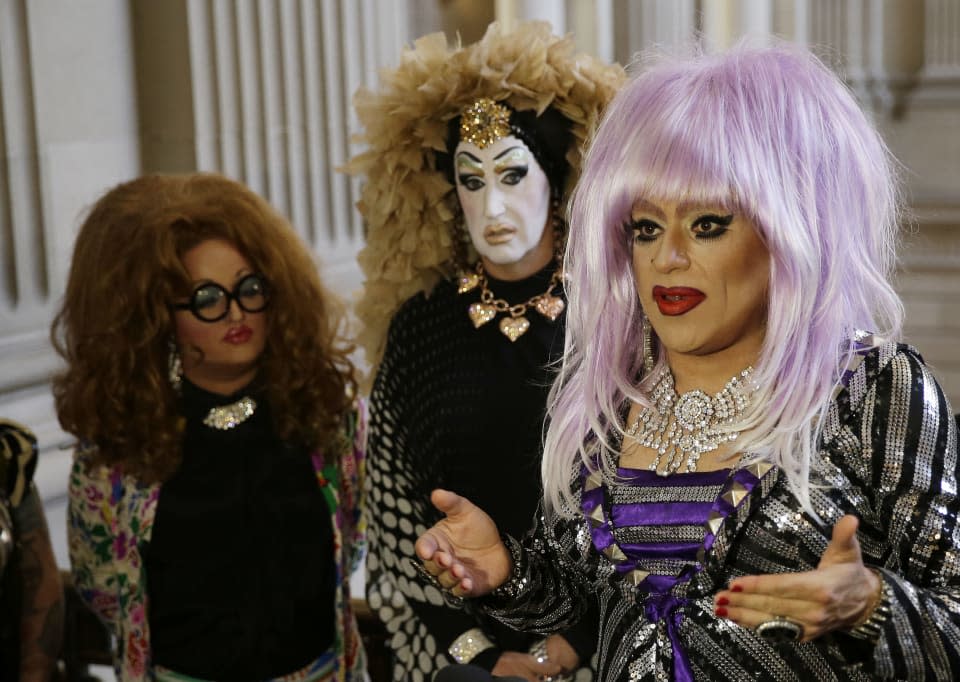 Maybe you've seen RuPaul's Drag Race, the flagship show on Logo TV, where men (dressed as women) compete to become America's next drag superstar. At the end of each show, the lowest-scoring competitors "lip sync for their life" in order to stay on the show another week. Now, some drag queens are fighting for their social media lives.

In mid-September, Facebook started deleting profile pages belonging to drag queens like Trannyshack founder Heklina. Why? According to Facebook's "real names" policy, the use of any name other than your legal name isn't allowed. Despite a face-to-face meeting with influential drag queens, Facebook won't cave to the pressure.

Considering anyone can make a Twitter profile and a Google+ profile with whatever name they want (the latter ditched its own "real names" policy in July), why is Facebook refusing to budge and let its users be their true authentic selves? Facebook says that its service is a "community where people use their real identities," and requires everyone to provide their real names in order to keep its community "safe." What constitutes a legal name to it is one that matches the user's "credit card, driver's license or student ID." The policy goes on to say you can include an "alternate name" next to your legal name, which it says could be a "maiden name, nickname or professional name."

In the drag community, a queen's "stage name" is their identity. It's who they are and represents their personality that they've grown into -- and it's certainly not a nickname. If RuPaul's Drag Race alum Latrice Royale (above with Jennifer Hudson) were to walk down the street in "boy clothes" and you wanted to say hello, you'd likely address her as Latrice, not by her legal name: Timothy.

Facebook is the one social network that generally controls your experience, whereas on Twitter, you're in control. Facebook decides what it thinks you want to see based on its mysterious EdgeRank algorithm. Reports from March show that less than 7 percent of fans see content from a Facebook page organically (fancy social media lingo for not being promoted with money). Naturally, Facebook is a big corporation that needs to keep its investors happy -- and to that end, it expects page owners to spend money to make sure their content is seen. Drag performers aren't businesses that sell products and they're not in a very lucrative line of work (not to mention those outfits can be expensive). On Facebook, they really just want to keep their friends and fans updated with what they're up to, such as performances and charitable causes. And they also make plenty of room for your everyday status updates, too.

A performer will set up their account to let others follow them and selectively accept friend requests. It makes sharing news about events (using Facebook's events mechanism) significantly easier. And most importantly, this allows for a more intimate connection.

The other challenge some performers encounter is safety and security. Most drag queens are wide open about who they are, but as San Francisco supervisor Scott Wiener reminded us, "Not all drag queens have that luxury." They might live in a place that's not super diverse like San Francisco or need to keep their drag life separate from possibly judgmental family and coworkers.

Let's say I had one Facebook profile using my legal name and another with the drag persona Edwina Gadgetina. Maybe I don't want Engadget's readers or my mom to know about the secret persona I go by at night in Palo Alto's hottest nightclubs. With current rules, I'd be forced to rename my "drag" persona account to "John Edwina-Gadgetina Colucci." When someone looks me up by my legal name, both profiles will appear in search and I might not want them to see my other life. Facebook's names policy is really what the company thinks constitutes a legal name. When Heklina spoke to a Facebook rep, she was told an algorithm discovered the drag queens and started going after them. Let's break that down: There's an algorithm within Facebook that's trying to figure out which names are real and which are fake. Sure, this algorithm could take out the "Seymour Butts" of the world, but why drag queens, and why now?

With its "real names" requirement, Facebook is in effect telling drag queens that they can't be their authentic selves on the service. Why, for the limited group of people Facebook serves up your content to, should it be in the business of censoring your identity and way of being? Social media is supposed to be about being yourself and saying what's on your mind, in the manner in which you choose to do so.

Back to my example about tech journalism's first drag queen, Edwina Gadgetina. Complying with the policy and changing my name to the one I'm born with won't work, and converting said profile to a "page" (rather than personal profile) isn't going to work, either. Facebook could easily have come up with a way for those who have a chosen name to use it, while still being able to weed out fakes or impersonators, but they chose to remain bullish and tarnish its image in the process.

On the other hand, Facebook has been known to be an ally with the LGBTQ community, an example of which was rolling out about 70 different gender options for a user's profile earlier this year. Last year, CEO Mark Zuckerberg marched in San Francisco's Pride parade along with former Baltimore Ravens linebacker and prominent "straight ally" Brendon Ayanbadejo (pictured above). This names issue likely doesn't mean that Facebook's suddenly had a change of heart about the LGBTQ community, but it needs to be further educated on why this issue is so important. A protest is planned on October 2nd in San Francisco to push back on the policy, and plenty of people are changing their profile pictures to the purple #MyNameIs graphic throughout various social media channels as a sign of solidarity. Another result of this is a mass Facebook exodus: Some drag queens (and others in the LGBTQ community) are fleeing en masse in protest, to Ello. Our own Nicole Lee walks through everything you need to know about this new social network.

The queen herself -- RuPaul, also weighed in on the controversy. She told The Hollywood Reporter: "In showbiz, there's no such thing as bad publicity as long as they spell your name right, but it's bad policy when Facebook strips the rights of creative individuals who have blossomed into something even more fabulous than the name their mama gave them." On that note, if you need some inspirational TV viewing and a good laugh, I highly recommend a few episodes of last season's RuPaul's Drag Race.

Finally, Edwina Gadgetina isn't real yet, but if she were, she'd want to remind drag queens deflated by all of this to not let Facebook get them down. Put on that wig, your Pink Pebble and hear the gospel of Latrice Royale: "Get up, look sick'ning and make them eat it."

UPDATE: Facebook's chief product officer Chris Cox issued an apology to the drag community on Wednesday, but this doesn't mean the "real names" policy will be changing. Facebook will keep its naming policy in place while it searches for solutions -- even if it's not sure what those solutions are yet.

Also, the protest originally planned in San Francisco on October 2nd is now a "victory rally," celebrating Facebook's apology and intent to make it right for the drag community.

In this article: brendon ayanbadejo, chris cox, drag, drag queens, edwina gadgetina, ello, explainer, facebook, heklina, latrice royale, LGBT, LGBTQ, mark zuckerberg, mynameis, rupaul, Scott Wiener
All products recommended by Engadget are selected by our editorial team, independent of our parent company. Some of our stories include affiliate links. If you buy something through one of these links, we may earn an affiliate commission.