Path is closing its private social network for good

Path's social apps get sold to the company behind KakaoTalk 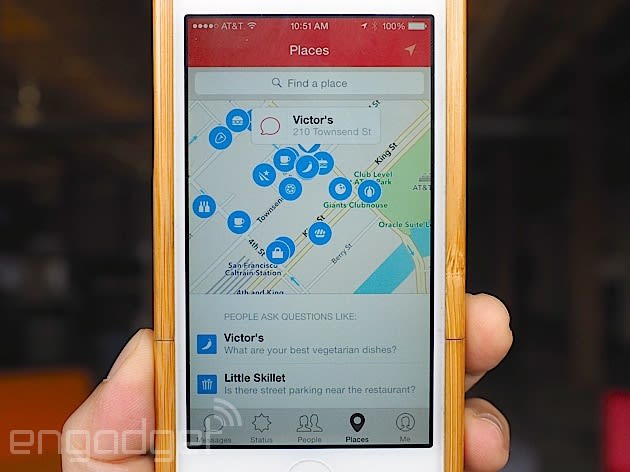 About three months ago, Path announced that not only was it rolling out a dedicated messaging app, it was also acquiring a company called TalkTo whose service allowed you to communicate with businesses via text. Today, Path is finally integrating the two together with a new feature called Places. Now in addition to messaging your friends on Path Talk, you're also able to send a text to any business or place, and no, you don't need to know the phone number to do so.

To use the feature, just head to the Places tab in the updated Path Talk app. From there, you can either select one of the nearby locations on the map or enter in the name of the desired business in the search field. Then type in your question or request, like "Do you have any reservations tonight?" or "Is there a time slot for a mani pedi today?" Path will then automatically assign an agent -- a real-life human being -- to act as a broker and make the call on your behalf. And in about five minutes, you'll get your answer.

"The idea here is that you don't have to worry about it," says Cynthia Samanian, Path's product manager. "We'll take care of it. Just go about your day. This app is about making your life simpler."

And just in case you're not quite sure yet on the sort of question to ask, the app will show a list of suggestions to help get you started. Samanian tells us that since TalkTo is an established company of over three years, these suggestions are actual questions that have been asked of these venues. She also wanted to be clear that you can use Places with any business, even if they're not in the map. "You're not at all limited to what you can see here," she says. 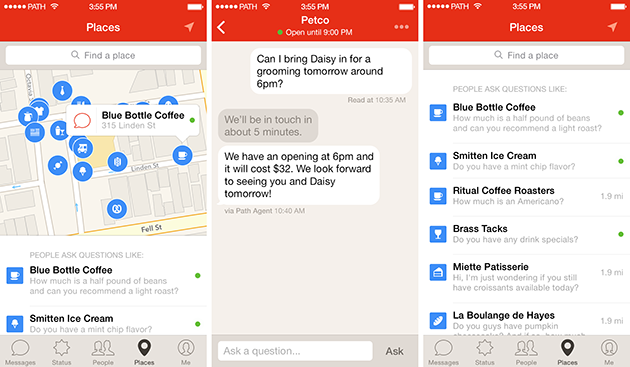 Additionally, the agent isn't just there to answer your questions; often he or she acts as a personal assistant by actually making the reservations for you. Since Path already knows your name and number, that's pretty easy for them to do. You're also able to cancel the reservation or change it to a different time within the same conversation thread. The agent is also often mindful enough to find out more information than you asked for. So for example, if you asked for the availability of a certain shoe at the local Nike store, the agent would respond not just with a Yes or No answer, but also the store hours, the sizes available and how much a pair would cost.

Stuart Levinson, who's the CEO and co-founder of TalkTo, explains that this is to avoid you having to make multiple calls. "It's about getting you the answer you need more quickly, before you even need to ask."

In a brief test of the app, I tried asking if I could get dinner reservations in a particular restaurant in downtown San Francisco. I searched for the name, tapped on the result and it showed me a green dot next to it, indicating that the restaurant was open (a closed restaurant would have a purple dot). A few minutes after I sent my question, an agent replied, "Sorry, but the restaurant is totally bought out for the night." So not only did I get my answer, but I was given a reason why I couldn't get the reservation. 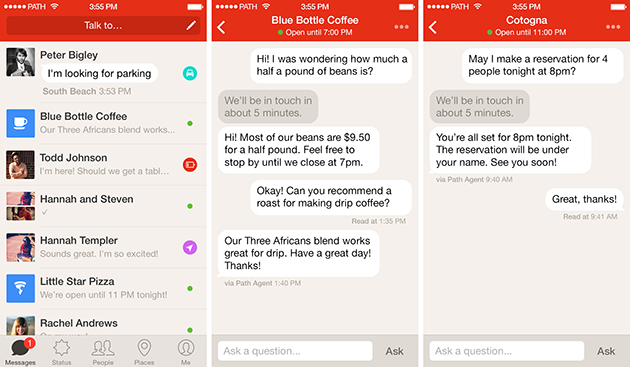 "It's the sort of thing you can't get with OpenTable," says Levinson. In fact, he mentions that sometimes Path Talk is better than OpenTable, because restaurants often don't give OpenTable their entire inventory, like seats at the bar or an outdoor patio. "We're actually taking you to the person that's standing there in the restaurant, getting that up-to-date information."

I was curious about the number of Path agents they had, but Levinson wouldn't spill the details. He did say that they've scaled significantly in the past couple of months and that it's a global team that works 24 hours a day, seven days a week. This, Levinson says, allows you to ask a question the night before when you happen to remember it, instead of putting it on your to-do list. "That's when it feels the most magical. You forget you even asked it, and the next morning, your phone beeps with the answer."

The Places feature, which is only for US and Canada for now, will be part of the new Path Talk app update. It should be out for both iOS and Android starting today.

Source: Path Talk, Path
In this article: path, pathtalk, stuartlevinson, talkto
All products recommended by Engadget are selected by our editorial team, independent of our parent company. Some of our stories include affiliate links. If you buy something through one of these links, we may earn an affiliate commission.