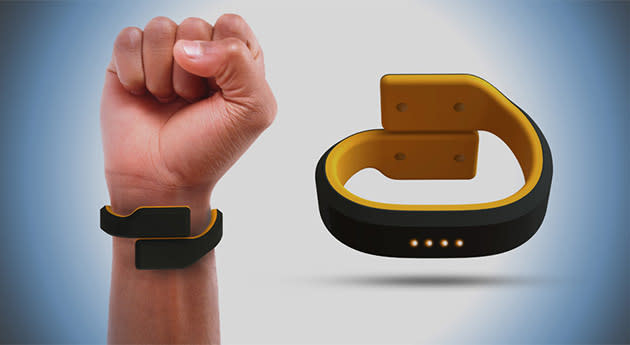 There's no way you'd use a shock collar to train your beloved dog, but you wouldn't mind using one on yourself if it means breaking your nastiest habits, eh? If that's the case, then your day has come: Pavlok (a wearable band that can zap you with electricity) is now up on Indiegogo, with its designer hoping to raise $50,000 to develop more features and to begin mass production. In order to train yourself to stay away from bad habits or continue doing good ones, you'll need to program the Pavlok app -- for instance, you can instruct it to zap you awake if you hit snooze twice on your alarm. The good news is that you can set the electricity the wristband zaps you with from 17 to 340 volts, so you can adjust it accordingly and make sure each it's not strong enough to actually hurt.

According to the device's Indiegogo page, its creator (Maneesh Sethi, a Stanford alumnus) is working on IFTTT integration and also opening up the Pavlok platform so anyone can make an app to go along with it. It even listed some possible software tie-ups, such as instructing the wristband via IFTTT to zap you if you send a message to an ex, to beep loudly and embarrass you whenever you step into a McD's with the help of a navigation app, or to remind you to walk more when paired up with an exercise app.

When we saw Pavlok earlier this year, the prototypes cost $250 each, but now you have the opportunity to grab one for $125 via Indiegogo if you can wait until it ships out by April 2015 at the earliest. By the way, Sethi's no stranger to the idea of receiving pain to break bad habits. Back in 2012, he hired a girl off Craigslist to, erm, slap him every time he went on Facebook -- something he claims quadrupled his productivity.

In this article: CrowdFunding, ifttt, IndieGoGo, mobilepostcross, pavlok, productivity
All products recommended by Engadget are selected by our editorial team, independent of our parent company. Some of our stories include affiliate links. If you buy something through one of these links, we may earn an affiliate commission.