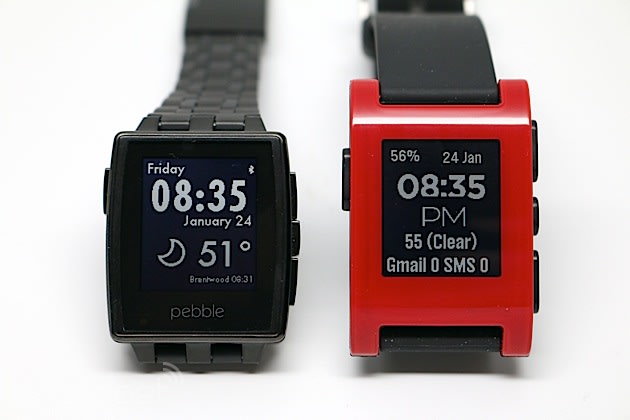 If you've been thinking about getting a smartwatch but haven't been persuaded to plunk down a lot of cash, Pebble's trying to make the decision a little easier for you. The watch maker is lowering the price of its full lineup by $50, which means you can now get the sporty original model (above, right) for $100 and the fancier Steel (above, left) for $200. Usually significant price drops like these are a reaction to slowing sales, but CEO Eric Migicovsky says that on the contrary, sales are still as strong as ever and the ecosystem is growing. The company wants to offer the "right price for the product" and properly represent Pebble watches in light of the swelling competition in this category, Migicovsky said. Indeed, with the debut (and proliferation) of Android Wear this year and Apple Watch next year, Pebble wants to add cost to its list of competitive advantages alongside battery life and cross-platform functionality -- especially as the holidays approach and smartwatch choices become even tougher.

The news doesn't stop there. Pebble is also pushing out a software update that makes its watches more appealing to health and fitness fans. One of the biggest frustrations about Pebble's firmware has been that fitness tracking apps were nearly impossible to use continously throughout the day (and into the night) because the watches couldn't run in the background -- if you wanted to track your steps or the distance you ran, you'd have to keep that app open and running the entire time. Today's update fixes that problem, so now all of your fitness activity can be tracked continuously, even if it's tucked away behind your favorite watchface.

Among the developers taking advantage of the new update is Misfit, which is releasing an updated app with 24/7 activity tracking and sleep monitoring; Jawbone, which is launching a watchface for Up users; and Swim.com, which -- as the name implies -- runs algorithms that let you measure your distance, pace, strokes and time. Pebble says that the functionality will be open to all developers, so we expect to see a lot more fitness-related apps get updated in the near future. Given the emphasis on health and fitness tracking in many of the latest smartwatches on the market, it's good to see Pebble take steps in that direction and address one of the biggest frustrations experienced by its user base.

As a final note, Pebble is also expanding its retail presence internationally in the UK, Scandinavia and Benelux in October. Up until now, buyers in those regions have been able to order watches through the company's official site, but this will be the first time they can grab one through other means.

In this article: fitness, fitnesstracker, jawbone, misfit, mobilepostcross, pebble, pebblesteel, pebblewatch, sleeptracking, smartwatch, swim, swimdotcom
All products recommended by Engadget are selected by our editorial team, independent of our parent company. Some of our stories include affiliate links. If you buy something through one of these links, we may earn an affiliate commission.