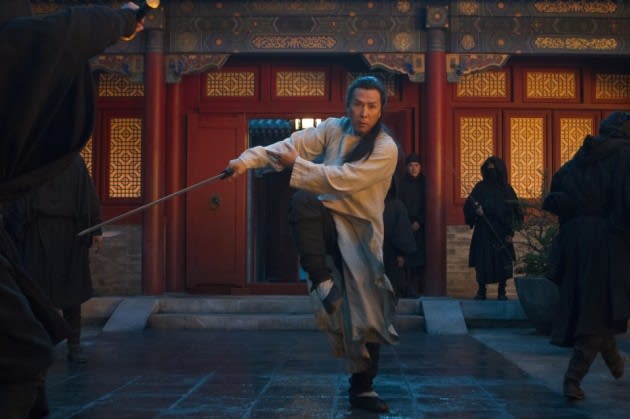 Unsurprisingly, there's one group that's not at all excited to hear Netflix and IMAX are arranging for the Crouching Tiger, Hidden Dragon sequel to hit theaters and streaming at the same time: movie theater owners. According to the LA Times, Regal, AMC, Carmike and Cinemark have all stated they don't plan to screen Crouching Tiger, Hidden Dragon: The Green Legend on their IMAX screens when it arrives next year, while Variety notes Canada's Cineplex and Europe's Cineworld are also staying away from the flick. The studios blocked a planned experiment to sell Tower Heist viewing for $60 a pop (honestly, they saved everyone there) back in 2011, but it seems doubtful they'll be able to intimidate Netflix into backing down.

Previous day-and-date home/theatrical releases, from Steven Soderbergh's Bubble in 2006 to recent flicks like Snowpiercer and Arbitrage, have usually been very limited. When Kickstarter-backed Veronica Mars debuted earlier this year, Warner Bros. had to buy every ticket in the theater in advance just to set up the screenings. IMAX seems content to screen the movie mostly in China, where Variety says it will have over 200 locations by the time this movie is out (and where Netflix does not yet offer service).

Source: Variety, LA Times, Washington Post, Reuters
Coverage: IMAX
In this article: AmcTheatres, Cinemark, CrouchingTigerHiddenDragon, CrouchingTigerHiddenDragonthegreenlegend, DayAndDate, hdpostcross, imax, netflix, RegalCinemas, theaters
All products recommended by Engadget are selected by our editorial team, independent of our parent company. Some of our stories include affiliate links. If you buy something through one of these links, we may earn an affiliate commission.