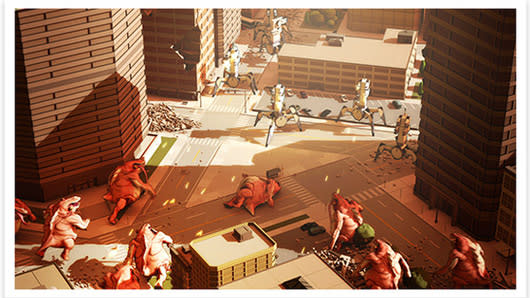 Taking place during an apocalypse, players control one of two warring factions ("ancient squid monsters from another dimension" and "giant killer robots") that compete to control Earth's sole remaining resource: humans. The project aims to capture "the tone, character, and pacing of a Command & Conquer game mixed with the mammoth battles of an Annihilation game," and will feature large-scale battles that take place in fully destructible city environments.

Uber is seeking $1.4 million in Kickstarter pledges to fund Human Resources, and aims to have a PC release ready by February 2016.


[Video: Uber Entertainment]
Source: Kickstarter
In this article: crowdfunding, kickstarter, pc, planetary-annihilation, rts, uber-entertainment
All products recommended by Engadget are selected by our editorial team, independent of our parent company. Some of our stories include affiliate links. If you buy something through one of these links, we may earn an affiliate commission.