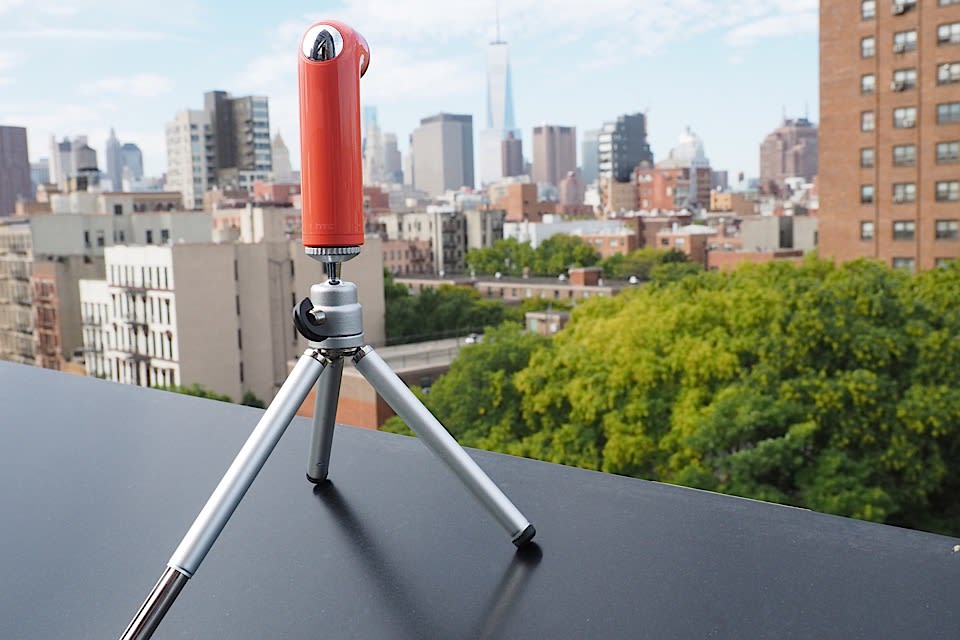 Periscope. Asthma inhaler. PVC pipe. These are just a few items that came to mind the first time I saw HTC's first standalone camera, which the company is simply -- and oddly -- calling the RE. Even though nothing about this device is normal, it's catered to the interests of the average Joe. "If you're going whitewater rafting down rapids, use a GoPro," an HTC marketing executive said, pointing out that the RE isn't supposed to compete with the popular action cam. No, HTC's brand-new imaging device, which should retail for around $200 when it hits US retail outlets like Best Buy later this month, is in a completely different category. But the biggest challenge HTC faces is in convincing buyers that this is better, faster and easier than simply pulling your phone out of your pocket when you need a quick shot. The RE is a small and light device, at 96.7 x 26.5mm and 65.5 grams (2.31 ounces). This makes it easy to securely handle it one-handed, and that's exactly the point: It's supposed to be petite enough for you to quickly draw it out of your pocket or purse and start taking pictures or video footage of anything at a moment's notice. HTC continually mentioned family scenarios, such as anytime the kids or pets are doing something cute; I'd love to use it at Disneyland, both when wandering around the park and when going on rides. In theory, the camera will be perfectly ideal for such situations -- it takes 16MP images, 1080p/30fps video, 4x slow-motion 720p video and time-lapse recording, and features a 1/2.3-inch CMOS sensor and 146-degree wide-angle lens.

There are only two buttons on the device: A shutter button on the outside, which you press once to take a picture and long-press for a couple seconds to take video, and a slow-motion capture toggle that you have to hold down to activate before starting the video. Notice that I didn't mention a power button, because HTC wants the device to be always-on, and thus, always ready and waiting for you to use it. Sensors embedded within the RE can tell when you grab it, so in theory it shouldn't take pictures when it's buried deep within your pants. You'll also find a mic on top, as well as an LED indicator and speaker just below the slow-mo button. A microSD slot sits on the bottom underneath a watertight tab; the RE comes with an 8GB card preinstalled, but you can switch it out for any card up to 128GB. There's also a micro-USB charging/data port and a quarter-inch tripod mount for a wide variety of accessories. 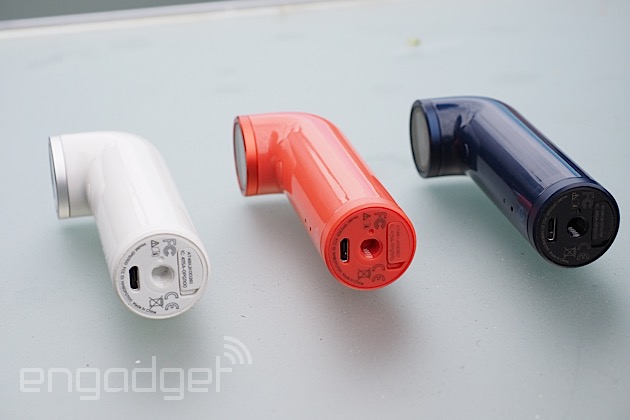 Although it's built using glossy plastic, rather than a matte finish, I didn't seem to mind very much. It certainly is a fingerprint magnet, depending on the color -- white, dark blue, teal and orange are available at launch -- but since my hand is already wrapped around it, those prints typically only show up in one place where my fingers routinely sit. And while glossy materials are often too slippery, I never felt like I was going to drop it.

With the RE, HTC wants to extend its reach to consumers who may not actually use an HTC phone; it's compatible with both Android 4.3 (or better) and iOS 7 (or better). Here's how it works: After downloading the app and using it to connect the RE with your phone, you can then use it to back up your pics and vids, change settings (like wide-angle versus standard angle, device updates, backup settings and more) and use the app's remote viewfinder and shutter. The RE app is also the only way you can take video in time-lapse mode; here, you can dictate how often it takes shots and the duration of the footage. Additionally, HTC says that developers will be able to access an API to open the RE up to third-party options -- Tencent and Instagram were specifically mentioned.

One of the most intriguing features on the RE is live broadcasting. That won't be ready at launch, but should be coming out shortly afterward. This is a fantastic use case for any aspiring (or already successful) YouTubers who want to record and upload events as they happen -- conventions, concerts, sporting events, perhaps even city hall meetings. I didn't get the opportunity to test out this feature, so I'm curious to see how reliable it'll be when it comes out; will there be significant latency issues, or is it capable of maintaining a consistent connection? 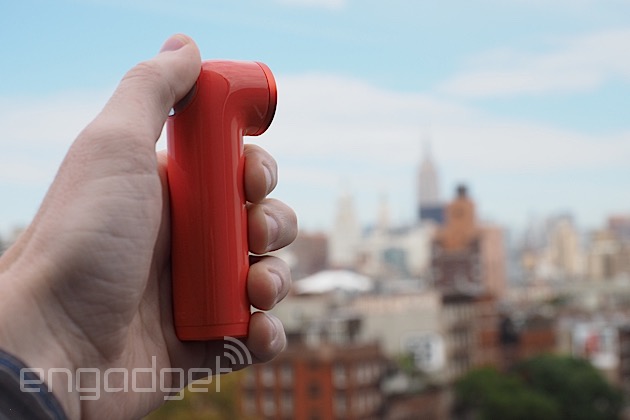 Fortunately, you can switch between a standard photo and wide-angle. The latter setting definitely captures a wide panorama as advertised, but the resulting images look like they were taken by a fisheye lens. Unless I needed to capture a breathtaking skyline or other majestic scenery, I preferred to stick with the normal angle; the wide-angle shots look too distorted to use for regular shots, but it's good to have the option to switch back and forth whenever necessary.

The unit I used was running pre-production firmware, so I will refrain from making final judgments on how it performs until I get my hands on a review unit. You can take a look at the samples to get a general idea of what to expect, but keep in mind that there are many parts of the experience that should improve before the device launches. I'm very hopeful for this, because my initial impressions weren't very good. My unit couldn't focus on close objects, although it focused on distant subjects in the same image; I had to pull back a foot or so for the RE to focus on the correct target. The f/2.8 aperture isn't good enough to handle low-light shots very well; most of them were blurry and noisy, and sometimes there was such little light that the device refused to even take a picture. The video stabilization wasn't able to compensate for the shakiness of my hand and smooth out my footage, which is crucial when using a device that's specifically designed to work for one-handed operation. (I've uploaded my full-res samples to my Flickr page.)

On top of all that, HTC's got some work to do on how quickly it takes photos. It promises that you can start it up and take a shot in 1.5 seconds, with shot-to-shot time down to 0.7 second. In its present state, it typically takes about twice the time. This can make all the difference in the world when taking pictures of kids, pets, cars and any other moving objects; it makes sense to have a small delay to compensate for the slight shake caused when you press the shutter button, but it still needs to be much faster than it currently is. 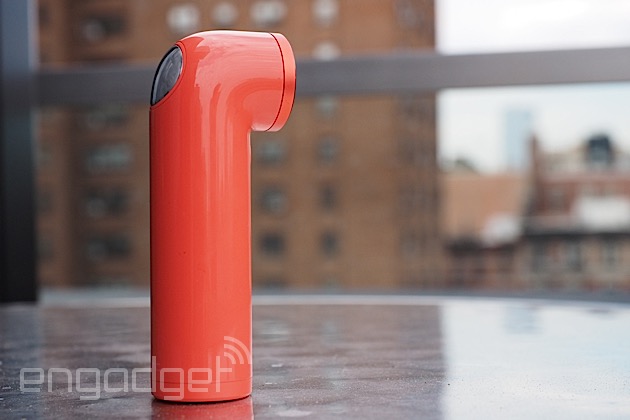 In terms of connections, the RE uses Bluetooth LE to initially pair with your phone, but the rest of the process is facilitated by WiFi Direct -- transferring files, the remote shutter and everything else.

The RE comes with an IPx7 water-resistance and dust-resistance rating, but you can buy a waterproof cap that boosts it to IPx8. It's also armed with an 840mAh battery, which HTC says is large enough to handle up to an hour and 40 minutes of continuous 1080p filming or 1,200 16MP photos. (As an aside, the 16MP images are shot in 4:3, but you can bump down the camera resolution to 12MP if you prefer 16:9 pictures.) I was barely able to get through a full day of testing, as my unit was in the red when I was finally ready to go to bed and charge it up.

HTC recognizes that debuting a new category of standalone cameras comes with a lot of challenges. The pricing is one of the biggest concerns; at $200, it's going to be a difficult sell for confused shoppers who don't know why they'd use it instead of whipping out their phone to take pictures. People will also become frustrated at the lack of an on-device viewfinder, which means users will be taking pictures with an aim-and-pray approach. Retail representatives may also find it hard to sell the device if they don't understand the point of the product, or potential use cases for it. HTC will also have to work on distancing RE from its spiritual predecessor, the GoPro.

Another point of confusion is the name. HTC chose RE for a few reasons: First, through this and other products (the Zoe app, for instance), the company wants to distance the device so it's not associated with HTC phones, especially since the app and service will be cross-platform; HTC also believes that the RE name aligns with some of the camera's attributes -- it's simple, easy to say and "you smile when you say it," the marketing team claims.

In this article: htc, HTC RE, HTC RE camera, RE, RE camera
All products recommended by Engadget are selected by our editorial team, independent of our parent company. Some of our stories include affiliate links. If you buy something through one of these links, we may earn an affiliate commission.