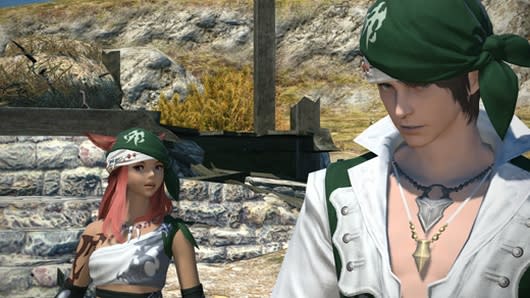 Limsa Lominsa is a rough town. There are pirates, layabouts, and all manner of shifty people at Final Fantasy XIV's island port city. The Yellowjackets keep the order in the streets, of course, but who keeps things clean in the back alleys? Why, the dashing Rogues, of course, the subject of the newest patch 2.4 preview on the official site. They might be cutthroats, brigands, and thieves, but they've still got a city to keep in one piece.

The preview also discusses Ninja, the job recently imported to Eozea from the Far East with the arrival of the Doman refugees. The preview makes it clear that both class and job will follow the usual progression for quests and gives a small slice of the flavor players can expect, but even the secondary class for Ninja is still shrouded in mystery, which is frustrating if you want to get leveling done before it goes live... but then, would you really expect the most stealthy class to give away all of its secrets?
Source: Rogue and Ninja preview
Coverage: Official Site
In this article: backstory, class, class-preview, classes, console, consoles, fantasy, ff, ff14, ffxiv, ffxiv-patch-2.4, final-fantasy, final-fantasy-14, final-fantasy-xiv, lore, news, news-items, ninja, quests, rogue, rogues, square, square-enix
All products recommended by Engadget are selected by our editorial team, independent of our parent company. Some of our stories include affiliate links. If you buy something through one of these links, we may earn an affiliate commission.