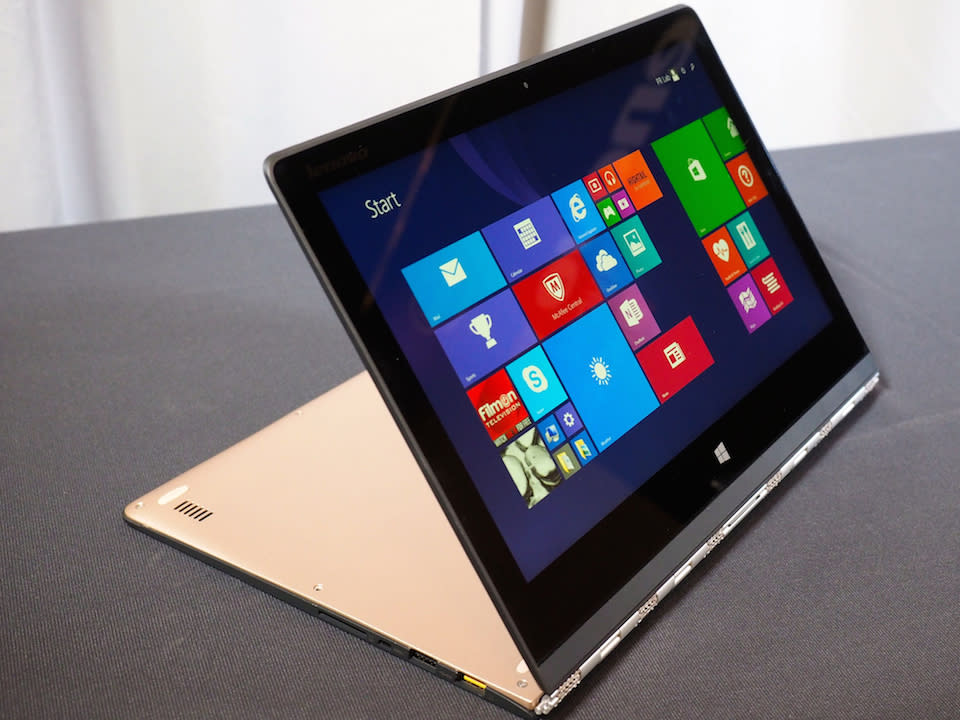 Remember how Intel recently unveiled a new family of chips designed to make 2-in-1 laptops much thinner and much lighter? Of course you do. Anyway, get ready to see lots of machines coming out this holiday season with extra-compact designs. Case in point: Lenovo's new Yoga 3 Pro Ultrabook, which launched today with a chassis that's 14 percent lighter and 17 percent thinner. All told, it weighs in at just 1.19kg, or 2.62 pounds. That's impressive even for a 13-inch Ultrabook, and it's definitely an improvement over the last-gen Yoga 2 Pro, which came in at 3.06 pounds. Otherwise, the Yoga 3 Pro is similar to the last model: It still has a 3,200 x 1,800 display, and the industrial design and keyboard layout have barely changed either. Of course, too, this is fundamentally still a Yoga, which is to say it has a 360-degree hinge allowing you to fold the screen back into tablet mode (and also "Stand" mode, and "Tent" mode). As before, the battery life is rated for up to nine hours, not that we ever got close to that on the Yoga 2 Pro. Hopefully Lenovo actually means it this time. As for performance, this is an ultra-low-voltage Intel Core M processor, which means in exchange for slimmer designs and long battery life, you may experience a slight dip in performance versus a standard-voltage system. That said, it shouldn't stop you from using the machine as your daily driver.

Additionally, in less important news, Lenovo announced the ThinkPad Yoga 14, the company's first convertible Ultrabook with that particular screen size. Like the original ThinkPad Yoga, which has a 12.5-inch screen, this newer model has a self-flattening keyboard that locks up when the machine is in tablet mode. As a relatively big-screen Ultrabook, the specs are a bit more heavy-duty than you'd otherwise expect from an ultraportable, including discrete NVIDIA GeForce 840 graphics, 1TB of storage and 8GB of RAM. Despite that horsepower, though, Lenovo says you can still get up to eight hours of runtime on a charge. Both laptops arrive at the end of this month, with the Yoga 3 Pro priced from $1,349, and the ThinkPad Yoga 14 starting at $1,199.

In this article: hands-on, lenovo, Lenovo Yoga, Lenovo Yoga Pro 3, LenovoYoga, LenovoYogaPro3, Yoga, Yoga Pro 3, YogaPro3
All products recommended by Engadget are selected by our editorial team, independent of our parent company. Some of our stories include affiliate links. If you buy something through one of these links, we may earn an affiliate commission.