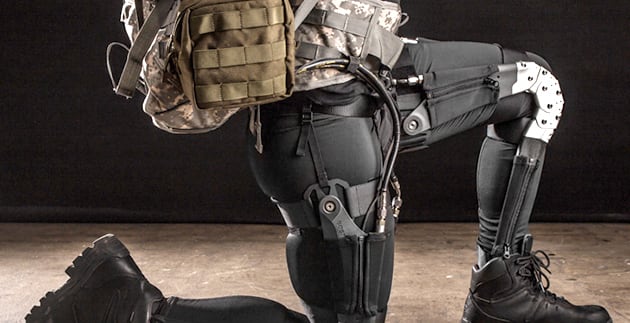 We may take them for granted, but blue LEDs were difficult to develop -- it took 27 years to create the first one, and now they're in virtually every LED lightbulb on the market. Now the scientists who invented these energy-saving lights are finally getting their due: the 2014 Nobel Prize in physics. "Their inventions were revolutionary," wrote the Nobel Committee. "Incandescent light bulbs lit the 20th century; the 21st century will be lit by LED lamps."

In other green tech news, a five-year-old girl became the first child in the UK to receive a 3D-printed prosthetic hand. The pink robotic hand was made, free of charge, by a US-based charity called E-nable. Meanwhile, Harvard unveiled a $3 million pair of robotic "trousers" that could give you superhuman strength, and Purdue University researchers developed a new type of robotic fabric that could lead to advanced spacesuits. In a development that could improve the lives of many handicapped people, a California-based company has created the world's first bionic leg, which straps to the leg of injured patients and can take their weight, allowing them to sit, stand and walk.

Earlier this month, Elon Musk teased the unveil of a new electric vehicle -- and on Thursday he delivered the Tesla D, an upgraded all-wheel-drive Model S with a dual-motor system that provides a significant speed boost. Sports cars have never been known for their fuel efficiency, but one of the biggest names in luxury vehicles is looking to change that. Lamborghini just unveiled its first-ever plug-in hybrid at the 2014 Paris Motor Show, and it can travel almost as far as the Chevy Volt in electric mode. Also on the green transportation front, London just unveiled its next-generation subway trains -- and they're streamlined, 100 percent driverless and WiFi-enabled. The city also proposed a 12-kilometer bike path that would float on the River Thames. The plan would enable cyclists to completely bypass London's busy streets, but it would come with a hefty price tag of £600 million. You don't need a bike path to bike on water, though -- you just need a water bike. Just ask Judah Schiller, the man who created a floating bike and used it to pedal across the San Francisco Bay. Schiller has created a consumer model of the water bike, which is now for sale. Water and paper don't usually mix well, but Signal recently created the world's first cardboard surfboard, and it's actually quite durable. The board features a honeycomb cardboard core that makes it lightweight and more affordable than the average polystyrene or polyurethane designs.

Could 3D printing be a viable way to build homes and other structures? Contour Crafting, the world's first and only large-scale 3D-printing technology, just won the grand prize in the 2014 Create The Future Design Contest for its ability to 3D print entire buildings from computer-aided design files. 3D printing could even lead to better buildings that are virtually earthquake-proof -- California-based Emerging Objects just unveiled a 3D-printed "Quake Column" that is super resistant to tremors. In other green design news, California-based Cal-Earth is teaching people from all over the world how to build disaster-proof earth homes using tools of war like barbed wire and sandbags. The concept was developed by Iranian architect Nader Khalili, and the homes are very durable and easy to build. Beijing's newest architectural masterpiece, the Sunrise Kempinski Hotel, is almost ready to open. The orb-shaped hotel is clad in glass; it lights up at night; and it's illuminated by hydroelectric-powered LED lights. In the Dutch city of Heerlen, architect Stéphane Malka has built an amazing temporary house that's made from dozens of old doors and windows, and it's open to the public. And with the launch of New York City's annual celebration of architecture and design, Inhabitat rounded up six of the NYC's top new design destinations.

With Halloween just a few short weeks away, we've launched our annual Green Halloween kids costume contest. If you know a kid with an awesome costume, send them our way! If you're a tech head who's at a loss for Halloween costume ideas -- we've got some great gadgety costume inspiration for you! You can express your phone preference by dressing up as an iPhone or Android device, or you can bring your favorite game to life by dressing up as a Minecraft character, Tetris blocks, or a Rubik's Cube. The best thing about these boxy costumes (think robots too) is that they're super easy to whip up in a flash with cardboard boxes, duct tape, old CDs and things you already have lying around the house.

In this article: eco, environment, green, inhabitat, tech, thisweekingreen
All products recommended by Engadget are selected by our editorial team, independent of our parent company. Some of our stories include affiliate links. If you buy something through one of these links, we may earn an affiliate commission.