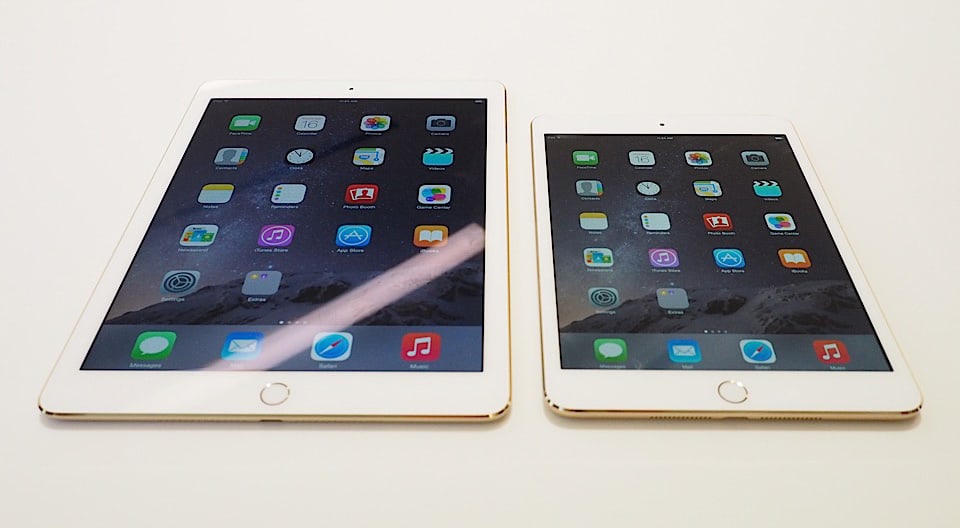 Unlike last month's Apple event, today's shindig was held in a tiny auditorium on the company's campus, nary a single gigantic white box in sight. Arguably, the size of the venue matched the importance of the products being announced -- minor iPad and iMac refreshes don't exactly command the same kind of attention as revamped iPhones and Apple's introduction into the wearables market. This doesn't mean the latest version of the iPad Air and iPad mini aren't worth a closer look, of course; they may be just another iteration of the series, but if you're in the market for a new tablet, there are a few new features to be aware of. Of the two products, the iPad mini 3 is less exciting. It's an incredibly small jump in, well, anything. What you see in this model is exactly what you enjoyed in the last one, with the exception of two things: Touch ID (Apple's fingerprint sensor) and a gold color option. Indeed, the 7.9-inch tablet features the same chamfered edges, 5MP iSight camera, Retina display -- even the weight and dimensions are the same, so it's not any thinner than the previous version. In other words, my hands-on experience was precisely the same this year as it was last year, unless you consider viewing a gold color a completely new experience; that said, the addition of Touch ID is exciting, though it's probably not enough of an improvement in the hardware to entice an iPad mini 2 user to make the switch.

The inclusion of Touch ID in both the new mini and Air makes it possible for the two iPads to use Apple Pay, which will be available on Monday, but the feature is limited to only online payments since neither tablet comes with NFC functionality for tap-to-pay. In other words, don't plan on taking your brand new iPad to your local store to buy groceries or a coffee. 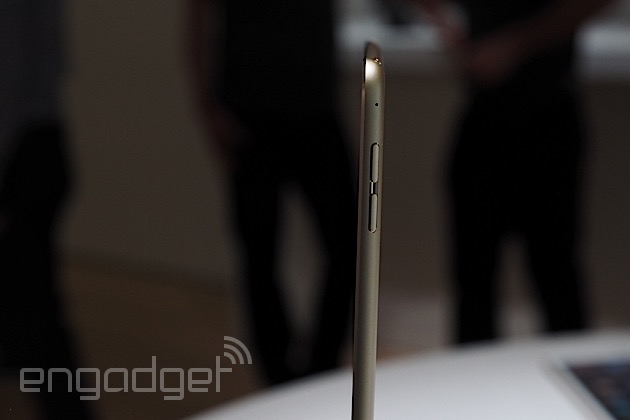 With the mini's improvements quickly out of the way, I'll put a little more focus on the iPad Air 2. This new iteration got some more features packed in than the mini did, which re-establishes Apple's 10-inch tablets as the king of the roost in design and specs. While it uses the same overall design language as last year's version, it's thinner: The sequel is 6.1mm, compared to the original's 7.5mm. It's also 32 grams lighter (for the WiFi model; the cellular option trims 34 grams off) while retaining the same height and width.

The display resolution and size remain the same, but the Air 2 is outfitted with a laminated optically bonded display that comes with anti-reflective coating that should improve outdoor visibility, viewing angles and glare from other light sources (Apple claims this reduces the reflectivity by 56 percent). Inside, there's a new A8X chipset and M8 motion coprocessor giving some more oomph to the new Air's performance; Apple reps proudly showed off a couple graphics-heavy games that looked completely smooth, but it's difficult to draw conclusions until I get my hands on a review unit. (Same goes with the display's reflectivity -- I'll need to see how it fares in non-controlled environments.) As usual, Apple doesn't give any specific details on cores or RAM; all we've been told is that it comes with 3 billion transistors, up from 2 billion in the Apple A8, and is supposed to be a 40 percent increase in CPU and 2.5-fold improvement in GPU performance. For giggles, it also comes with a barometer, plenty of LTE bands with faster performance and carrier aggregation as well as dual-band WiFi 802.11a/b/g/n/ac. 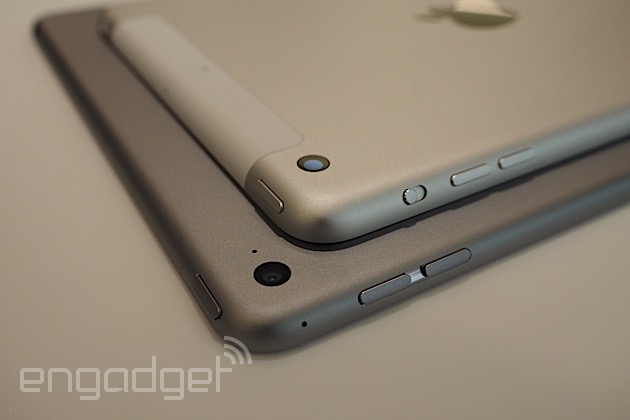 Curiously, the Air 2 units I played with didn't come with a mute switch, whereas the mini 3 did; you'll need to go to the Control Center for rotation lock, and holding down the volume-down button will trigger the mute. This may simply be due to the thinness of the new device, but I hope to get some answers on that soon.

Since the trend of taking pictures and videos with one's tablet isn't going away anytime soon, Apple's made a point to improve the camera from 5MP to 8MP, while adding new features like Burst Mode and slow-motion. Again, this is certainly more iterative than groundbreaking, but at least the upgrade brings the new Air closer to the iPhone 6's camera and gives it an imaging advantage over the mini 3. 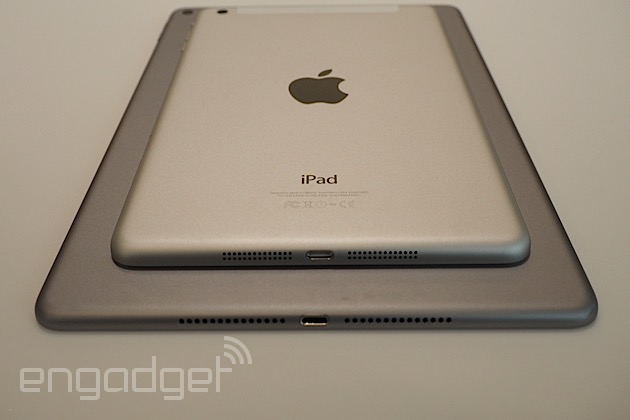 The LTE version of both iPads also come with a brand new type of SIM card that I hope becomes a new standard in all devices: It supports a lot of different carriers, rather than being limited to one per network. Instead of having to physically switch cards anytime you want to use a different operator, you can just hang onto the same exact card regardless of which one you move to.

After Apple's efforts to make the Air and mini lines equal in features and design last year, it seems a curious change for the company to depart from this strategy and put some distance in spec sheets between the two devices. I wonder if the feature parity took too much of a bite out of sales (did the mini 2 adversely affect Air sales?), or if Apple's simply decided on a different design strategy. Regardless, it's clear that the Air now sits on top of the hill, and that the $100 cost savings you get by choosing the mini isn't just for the size difference anymore.

In this article: apple, appleipadair, ipadair, iPadAir2, iPadEvent2014, iPadmini3, mobilepostcross
All products recommended by Engadget are selected by our editorial team, independent of our parent company. Some of our stories include affiliate links. If you buy something through one of these links, we may earn an affiliate commission.