There's no better time for wild speculation than the weeks leading up to BlizzCon. This year is no different. Topics of debate among Blizzard fans include whether or not a Hearthstone expansion will be announced, whether we'll finally see StarCraft II's Legacy of the Void, or if there will be a dark horse World of Warcraft expansion teaser. More tantalizing than those, however, is the possibility of an announcement for a brand new game.

The rumor of a new game announcement has been spurred on by curious gaps in the BlizzCon 2014 schedule and floorplan. In previous years, there was only a 45 minute gap between the opening ceremony and the first panel on the main stage -- the opening ceremony ended at 11:45 a.m. and the panel to follow began at 12:30 p.m. This year, while the opening ceremony ends at its usual time, neither the main stage nor panel stage in Hall A have anything scheduled whatsoever until 2:15 p.m. That's a gap of two hours and 30 minutes. That timespan could accommodate an entire panel, if not two panels per stage. The Main Stage has gaps in its schedule on Saturday as well, one hour and 45 minutes and two hours respectively, but Saturday gaps are slightly less suspect than those of Friday morning.

Gaps in BlizzCon 2014's floorplan also raise suspicions. Previous years, each hall of the convention other than that housing the Main Stage accommodated a large demo station for a Blizzard Titles. 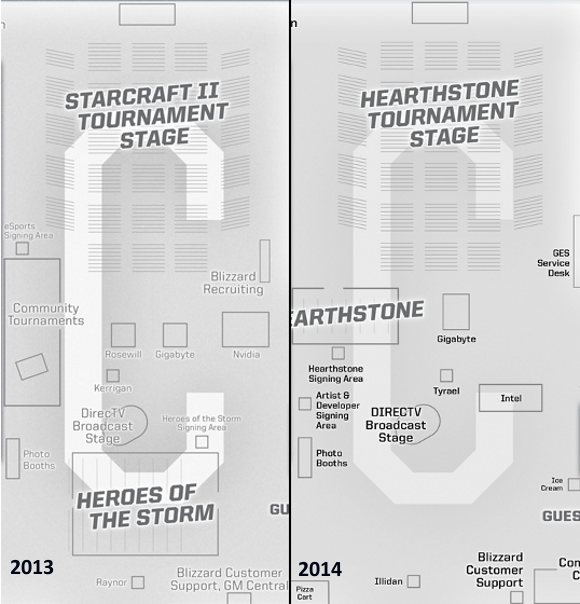 BlizzCon 2014's floorplan does not include a demo station in Hall C, and there appears to be no new additions that would utilize that space. Any BlizzCon attendees of BlizzCons past can tell you the space typically used by that demo station has square footage equal to a large family home. Considering Blizzard is expanding into spaces such as the arena next door and eliminating its social community gathering places, it makes little sense that the space would be left empty. Unless the DIRECTV Broadcast Stage is being expanded to fill a full third of a convention hall, surely something must be in that space.

Is there any guarantee Blizzard will be announcing another new title? No. But unless they've made very unusual decisions this year, leaving significant floorspace and stage time barren, there must be something they're keeping close to their chest.
All products recommended by Engadget are selected by our editorial team, independent of our parent company. Some of our stories include affiliate links. If you buy something through one of these links, we may earn an affiliate commission.