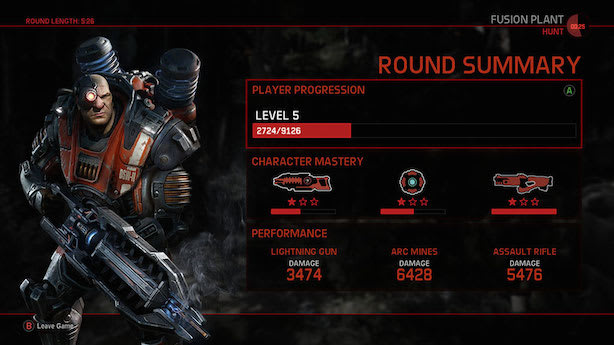 Evolve players will hunt character perks and general experience in addition to monstrous game, as detailed in a recent update on Evolve's official site. Progress is earned in two ways: Character Progression, which relates to a player's efficiency with a specific character's arsenal, and Player Progression, which is tied to a player's general account rather than one particular class type.

Aptitude with a hunter's (or monster's) weapons and abilities is rated on a three-star scale, and a "permanent perk" is granted with each earned star. For example, you'll need to deal a set amount of damage with Markov's assault rifle to earn a two percent accuracy boost (tied to the first star), while distributing enough pain via headshot will grant a 10 percent accuracy boost and an elite-tier weapon, as well as the rifle's third star.

Player Progression won't be in the Halloween weekend alpha, but when it does show up, it'll dish out medals, awards and levels, with that last element capping off at 40. The update notes that this tier of rewards is "generally earned through time spent playing" and unlocks perks like armor regeneration, jump bonuses and a quicker jetpack recharge.

New characters can also be unlocked by earning stars for their respective class type. If you plan on prowling through Evolve's alpha however, just know that any earned progress will not carry over beyond the event's weekend. Alphas are all about the thrill of an early hunt though, right?
[Image: 2K Games] 10
Source: Evolve (site)
In this article: 2k-games, evolve, microsoft, pc, playstation, progression, progression-system, ps4, skill-system, turtle-rock-studios, xbox-one
All products recommended by Engadget are selected by our editorial team, independent of our parent company. Some of our stories include affiliate links. If you buy something through one of these links, we may earn an affiliate commission.