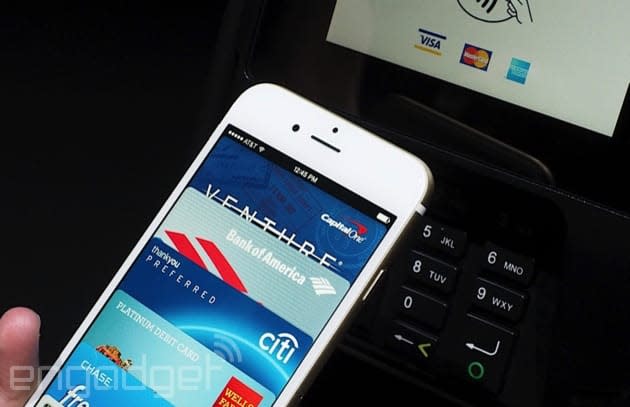 When CVS and Rite-Aid shut off their NFC-based payments to prevent customers from using Apple Pay, we heard it was because they're part of a large group developing rival technology CurrentC. Now, The New York Times has shed more light on the issue, and it turns out they did it not just to stifle the competition, but also because they're contractually obligated not to offer Apple Pay in their stores. The whole Merchant Customer Exchange (MCX) group, including these two drug stores and big-box retailers Walmart and Best Buy, signed a contract years ago that binds them to Current C. That contract, signed way before anyone knew if Apple Pay was ever going to materialize, prevents them from supporting rival technologies, as doing so will earn them outrageous fines.

CurrentC's the ideal payment method for MCX retailers, because it connects directly to people's bank accounts, eliminating the need to pay credit card fees. Also, it allows stores to track customers' spending habits themselves. Problem is, it won't be ready until 2015, and by then customers might already be too attached to Apple Pay to consider anything else and demand its use in MCX members' outlets. Of course, it's always possible for Apple Pay not to catch on in the end, but -- bad news for this bunch of companies -- it's doing really well thus far.

In this article: apple, applepay, currentc, mcx, mobilepostcross
All products recommended by Engadget are selected by our editorial team, independent of our parent company. Some of our stories include affiliate links. If you buy something through one of these links, we may earn an affiliate commission.