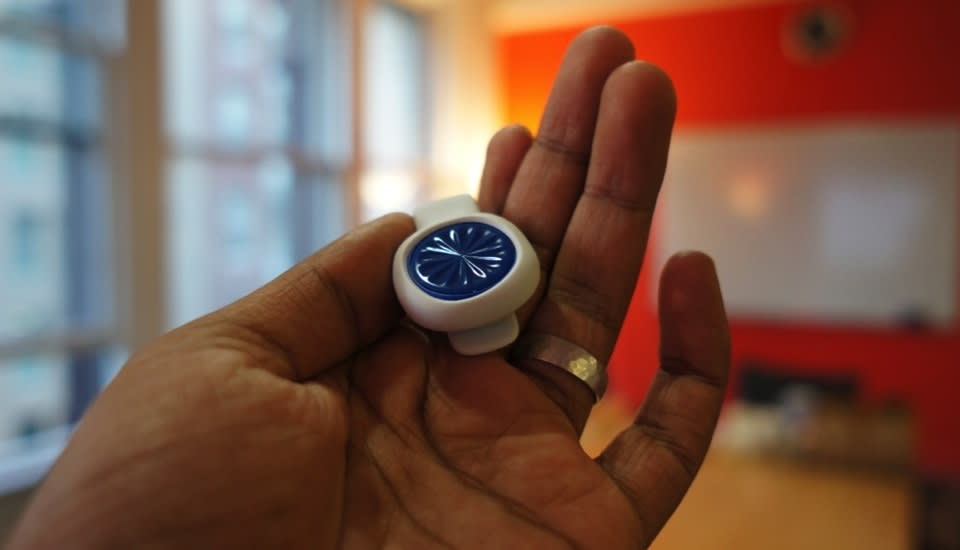 Jawbone's first budget-friendly wearable may look a tad familiar to anyone who's seen Misfit's stylish gadgets. Just like the recently announced Misfit Flash, the Up Move is a tiny $50 (£50) hockey-puck-looking device targeted at people who haven't yet jumped aboard wearable bandwagon. But while it's not necessarily revolutionary, this could be Jawbone's ticket to getting even more people on its health tracking platform.

Jawbone also announced the Up3 today, its latest high-end wristband which is better-suited to experienced wearable users than this smaller device. The Up Move offers most of the features from Jawbone's Up health bands -- including step, activity, and sleep tracking -- but it lacks the Up's vibrating notifications and smart alarm clock. That's to be expected, though, as it relies on a watch battery for power (again, similar to Misfit's devices). Jawbone claims the Move will get around six months worth of battery life -- a decent tradeoff for not having to worry about charging it every few days.

While it's built out of anodized aluminum, the Up Move actually feels more like plastic in your hand. It's a bit pudgier than Misfit's gadgets, but it's still small enough to drop into your pocket and forget about it. It also features wireless Bluetooth low-energy synchronization, just like last year's Up 24.

The Up Move's "watch" face serves as its only button: Press it once to show your step progress; twice to show the time (displayed analog-style with two LEDS); and three times to show your sleep progress. You can wear the Up Move in a variety of ways: In your pocket; clasped onto your clothing with the included clip; or on your wrist with a $15 wrist strap (which will be available in slim and standard-width variants).

Andrew Rosenthal, Jawbone's group manager for wellness and platform, noted that the Move is all "about people who are starting their tracking journey." The company has found that customers who have friends on the Up platform tend to be more engaged, so it makes sense for Jawbone to have a low-priced device to bolster its platform.

Indeed, Jawbone's health tracking platform is what we should really be paying attention to these days. The company recently opened up its platform to work with other devices, including Fitbit's lineup and anything running Android Wear and Apple's HealthKit. Ultimately, it won't matter if you're wearing a Jawbone device or not -- more data will inevitably make Jawbone's platform stronger.

Jawbone is also rebranding its platform's insight engine, which offers personalized health tips, as "Smart Coach." Expect to see the company touting this particular feature much more in the future, as it's one of the biggest differentiators Jawbone has up its sleeves. It doesn't take much to track steps these days -- what matters more is what that data can do for consumers. "For us, it's not just the hardware," Rosenthal said. "The hardware is an entry point -- it's a beautifully designed, highly-engaging, covetable entry point to a behavior change system."

Rosenthal didn't have much to say when I brought up the very obvious similarities between the Up Move and Misfit's lineup, but he noted that Misfit hasn't yet enabled its devices to work with Jawbone's platform. Given that even Fitbit's devices work with the Up platform, that makes me wonder what role the Up Move will serve if Misfit, whose devices are far sleeker, ever decides to cooperate.

The Up Move is available for pre-order today on Jawbone's site, and it's also heading to Amazon, Apple stores, Best Buy, and Target later this month. Jawbone will eventually sell the device in batch packages for families and groups, though it's unclear how those will be priced.

16
Source: Jawbone Blog, Jawbone Store
In this article: hands-on, Jawbone, Up Move, upmove, video
All products recommended by Engadget are selected by our editorial team, independent of our parent company. Some of our stories include affiliate links. If you buy something through one of these links, we may earn an affiliate commission.