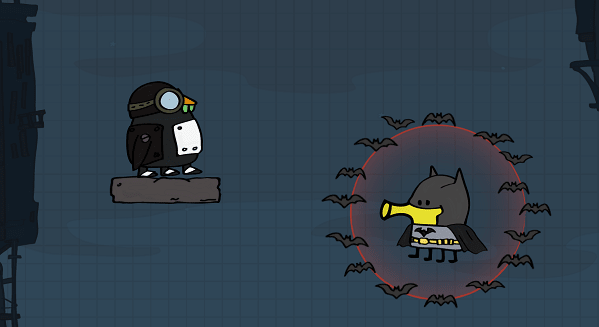 Doodle Jump DC Super Heroes is the Batman game iPhone deserves, but is it the one it needs right now? Who cares, it's a cute re-skin of Lima Sky's bouncy vertical platformer that swaps in batsuits, arch-nemeses like the Joker, and bat-powers that include the bat-grappling gun, bat-copter and... er, bat-trampoline. Still, nothing beats an old-fashioned bat-climb.

It's free to download right now (in-app purchases are tied to crystals that you can collect by playing), and the Batman episode is one of a number of DC Comics installments coming to the game. According to Warner Bros, future updates will include Superman and Wonder Woman, along with their respective galleries of rogues. And if that's not enough mobile DC Comics tie-in for you, there's always the roster of heroes coming to Puzzle and Dragons next week.
[Image: WBIE]
Show full PR text
Lima Sky, Warner Bros. Interactive Entertainment and DC Entertainment Announce Doodle Jump DC Super Heroes

Doodle The Doodler Dons the Cowl for an Epic Mobile Game Team Up, Out Now for iPhone®, iPad® and iPod touch®

New York, NY – November 6, 2014 – Independent game studio Lima Sky is teaming up with Warner Bros. Interactive Entertainment and DC Entertainment to develop Doodle Jump DC Super Heroes, a whimsical mashup of two iconic properties. The first installment, now available for the iPhone, iPad and iPod touch, contains the timeless "jump 'em up" gameplay of Doodle Jump infused with Batman and his famous Rogues' Gallery. Future updates to the game include other DC Comics' Super Heroes, including Superman and Wonder Woman, and their nemeses.

Doodle Jump DC Super Heroes is developed by Lima Sky, and is licensed and published by Warner Bros. Interactive Entertainment on behalf of DC Entertainment.

"We at Lima Sky are thrilled to bring Doodle Jump into the amazing worlds of DC Comics Super Heroes," noted Igor Pusenjak, co-founder of Lima Sky. "We've been lifelong fans of the Batman universe and brand."

The initial Doodle Jump DC Super Heroes episode takes place in the fabled crime-ridden Gotham City, as The Doodler dons Batman's cowl to chase down infamous villains, who have stolen powerful energy crystals that threaten the well-being of countless innocents. Players jump and fight their way up, up, up Gotham City's historic skyline to battle Batman's archenemies: The Joker, Penguin, Mr. Freeze and more. Fans can also fly the Bat-Copter or use the Bat-Jet to chase villains to new heights, or utilize the Bat-Grappling Gun to stop their fall.

Doodle Jump, the #3 best-selling paid app of all time, is celebrating its fifth anniversary.

Doodle Jump DC Super Heroes is available now as a free download on the App Store, and is coming to the Android and Amazon Appstores in 2015.

About Lima Sky
Lima Sky is an iOS development studio and publisher dedicated to creating entertaining, innovative and educational games and apps, with a special focus on the youth market. Founded in July 2008 by Igor Pusenjak, a graduate and faculty at the MFA interactive design program at Parsons School of Design in New York, and Marko Pusenjak, a veteran mobile applications developer, Lima Sky has established itself as a leading independent developer and publisher.

™ & © DC Comics (s14)
Source: iTunes
In this article: dc-comics, doodle-jump, doodle-jump-dc-super-heroes, ios, ipad, iphone, lima-sky, mobile, release-date, Warner-Bros-Interactive-Entertainment, WBIE
All products recommended by Engadget are selected by our editorial team, independent of our parent company. Some of our stories include affiliate links. If you buy something through one of these links, we may earn an affiliate commission.