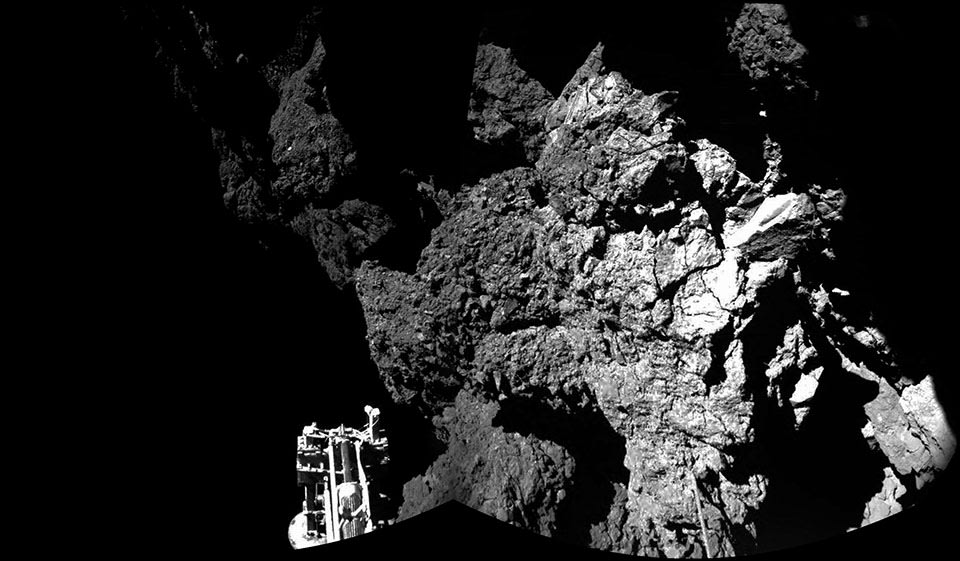 After Rosetta's 10-year journey -- capped off with the smooth 7-hour descent of its Philae lander -- an explosion of elation went up in the European Space Agency's mission control center in Darmstadt, Germany. At around 11:04AM Eastern Time, humanity has, for the first time in history, carefully coaxed an extension of itself onto the surface of a comet. The first few moments after landing turned tense as the ESA team worked to determine if everything worked, but Philae Lander Manager Stephan Ullamec broke the strained silence.

"The harpoons have been fired and the landing gear has been moved inside. We're on the surface. Philae is talking to us, more data to come," he said. Spacecraft operations manager Andrea Accomazzo (whom the internet started calling "ESA Hoodie Guy") couldn't quite help himself.

"We can't be happier than we are now," he yelped.

Update: ESA just released the first image from Rosetta on the surface of the comet (above) with one of its three feet visible in the foreground. The full panorama will be available at 2PM ET. 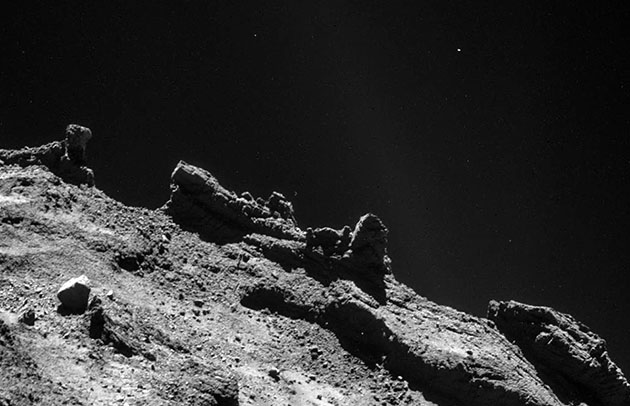 Rosetta's rendezvous with comet 67P/Churyumov–Gerasimenko back in August was a milestone in its own right, as was how the probe slipped right into orbit around it a month later. Now that Philae has cemented itself into the history books, though, it's time for testing. Lots of it. You see, this isn't the first time humanity has come into extremely close contact with a comet -- NASA used its Deep Impact probe (no relation to the awful movie) to smash what was essentially an 820-pound, camera-laden bullet into the nucleus of a comet called Tempel 1 in 2005. With an actual, operational spacecraft on the comet, we have a shot at learning even more about the origins of the solar system... not to mention how we all came to be.

The ESA has been receiving telemetry data from Philae since the moment it touched down, but we're all waiting for the first round of juicy stuff -- especially those initial panoramic and surface images -- to start making the rounds. In addition to that spacefaring photography, Philae will also measure the comet's magnetic field and gas emissions for about 60 hours before its bank of batteries runs down. And after that? It'll switch to a set of backup batteries that can be recharged by Philae's solar panels, which ESA engineers hope will last about four to five months before finally giving up the ghost. Once those cells have finally run dry, Philae will then continue to ride 67P as it careens on its six-year orbit around the solar system, another testament to human ingenuity and the curiosity that continually pushes us to cast our eyes toward the heavens.

Source: European Space Agency
In this article: Churyumov-Gerasimenko, comet, Comet 67P, ESA, EuropeanSpaceAgency, Rosetta, space, video
All products recommended by Engadget are selected by our editorial team, independent of our parent company. Some of our stories include affiliate links. If you buy something through one of these links, we may earn an affiliate commission.