​GoPro cameras have come a long way in the last couple of years. Not only are they a lot smaller (my once "slick" HD Hero2 looks enormous compared to the new Hero4), but also the resolution they can record has finally reached full 30 fps 4K. Not bad considering I don't even own a 4K TV yet. Sure, there are phones that can record 4K, but not with the same versatility and control of an action camera. GoPros have actually recorded 4K (albeit only at 12 fps) since the Hero3, but it's taken until now to deliver a decent frame rate without severely compromising the (already medicore) battery life. This means the company has possibly reached something of a glass ceiling when it comes to its top-billing feature (resolution). Maybe we'll see 8K next year, or 4K at 60 fps, but I honestly feel most of us are a long way from either wanting, let alone needing that. So what's a camera company to do?

If you followed our announcement post for the Hero4 line, you'll know that the answer is: Add usability features. Though, I'd argue many might have been just as happy with a healthy boost in battery life instead of some new functions. Now that I've had a few weeks getting to know the new cameras (the Black and Silver additions at least; I've yet to try the new Hero base model), I actually think the killer feature isn't even on the most expensive camera GoPro makes; it's the touchscreen on the Silver. 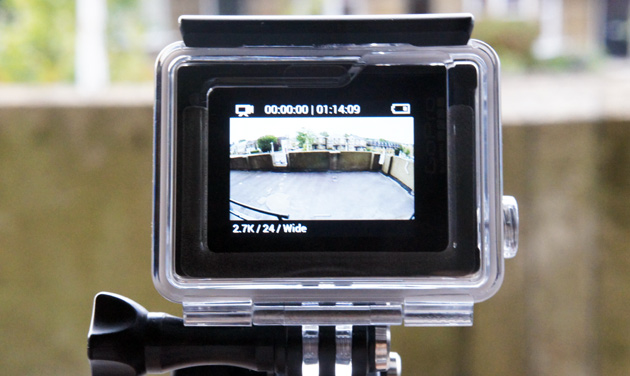 Backing up a bit: For the uninitiated, GoPro used to have a simple "budget, mid-level and flagship" model range. These were called White, Silver and Black, and the feature set got better as you went up in price, but each model could always do everything the one below it could. The cameras all looked the same too (unless you looked real close), so you never felt cheap for rocking out with a White. At the same time, it meant you had to know which one you were taking with you if, like many, you had more than one camera (you gotta be able to shoot your ride from multiple angles now, right?). Recently, though, GoPro changed things up a bit, releasing a new "Hero" entry-level camera (note, no "4") while introducing the Hero4 in Silver and Black editions ($400 and $500, respectively). Another first was that the Black wasn't just the Silver with a few more features or camera modes. The Silver has a touchscreen display on the back, while the Black edition does not. This makes the Hero4 Silver much easier to use, and way more consumer friendly. The trade-off: There's no full 30 fps 4K (it tops out at 15 fps) if you want that screen.

Anyone who's used one of these cameras will know that the menu system has never been that great. It involves a lot of clicking, then often missing your option and having to go round again. It's gotten better with the Hero4, thanks to bringing another button into the mix -- but it's still more or less the same. Experienced users might be thinking, "Use the app; it's much easier." It is. But sometimes the WiFi doesn't connect, or you don't have/can't use your phone. There's also the remote, of course, but that costs an extra $80, and won't let you see your shot. The Silver's touchscreen, on the other hand, is always there, easy to use and doesn't suffer any lag (app users will know exactly what I'm on about). Not only did this camera suddenly get easier to use, but my video and photos are better because I can see what the camera is seeing so easily.

I was worried that the screen might have a direct impact on battery life, but so far the effect seems negligible. There's a small button next to the screen that lets you turn it off (instead of waiting for it to time out), and I wager that being able to get your shot set from the get-go pays dividends. No more grabbing shots twice, setting it to record accidentally (all those one-second selfie clips) and so on. There's also the fact that you can instantly watch clips, photos and time lapses without having to fiddle with the app, or offload an SD card. Being able to delete duff clips quickly means you're also less likely to run out of memory card space (especially handy if time-lapses are your thing).

There's more to talk about than that screen, of course. The new Night Lapse, and Night Photo modes definitely add some creative options, and the "HiLight Tag" feature is probably really handy; I just don't find myself remembering to use it yet. For me, the problem with tagging is that it requires you to tap the side button -- which presupposes you have access to the camera. You can also use the remote for this though -- if you have one. Maybe I'll get in the habit, but it hasn't happened yet. Let's be clear: The Black edition does do all of the above, it just doesn't have that screen. But, of course, does have that 4K 30 fps mode. There's one other trick the Black has over the Silver, and that's shooting 1080p at 120 fps. If you're at all into silky-smooth slow-motion, then that's going to be a really tempting feature. Me? I'm OK with 1080 at 60 fps (or dropping to 720p if I really need to). As you can probably tell, for my usage habits, I'm finding that Silver really is the new black. Don't forget, it's a full $100 cheaper, too!

That's not to say I'd take two Silvers over one of each. That 4K/30 fps resolution has uses beyond just pixel-matching a 4K TV. For example, if you're recording something you might want to use software to stabilize after, then with 4K you have more image real estate to play with (for the crop that software stabilization can require). The same goes for drone flying. For the most part, I've had the Black edition strapped to a drone. Not only do I think the aerial vistas you get from the air are more deserving of the higher resolution, but also should the landing gear or props get in view (easily done when throwing a Phantom 2 around in the air -- as you'll see above), then you've got more margin for cropping them out. Maybe not the best way to deal with the issue, but for my amateur needs it works.

There's a logical conclusion here, and one that I fear I'll have to wait the best part of a year to enjoy. I have everything crossed that the GoPro Hero4+ will bring 4K/30 fps and that touchscreen together on one device. For now, though, it's the Silver that's getting the most amount of fresh air.

In this article: 4k, action camera, black, engadgetirl, gopro, hero 4, irl, silver, touchscreen, uk-feature, video
All products recommended by Engadget are selected by our editorial team, independent of our parent company. Some of our stories include affiliate links. If you buy something through one of these links, we may earn an affiliate commission.