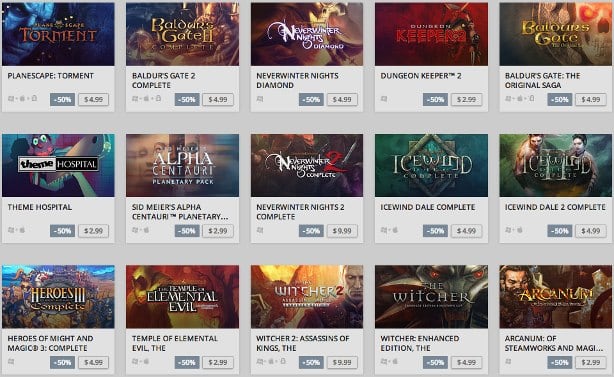 GOG.com kicked off its DRM-free Big Fall Sale Finale this morning, putting more than 700 games on sale until Tuesday, November 25. The sale is split into two 48-hour periods, the first a "recap of flash deals" that rapidly come and go, and a second period with the Big Fall Sale's daily bundles that starts on Sunday. Thrifty buyers may want to act fast, as some of the flash deals will expire within hours.

OG.com also has deals on bundles starting today, such as the Fedora Deluxe Pack, a five-game Tex Murphy bundle that players can download at 80 percent off ($7.16). The digital games distributor is also offering a movie bundle for $8.45 that features five films, including The King of Arcades, Pixel Poetry and Minecraft: The Story of Mojang.
[Image: GOG.com]
Show full PR text
Last Call from GOG.com: the DRM-Free Big Fall Sale 4-Day-Long Finale Starts Today

Calling all gamers: GOG.com is wrapping up its 2014 DRM-free Big Fall Sale with a finale of epic proportions! All of the games featured in flash sales throughout the entire promo are available once again for the next 48 action-packed hours (starting Friday, November 21, 2:00 PM GMT), with 25+ concurrent offers at any given time.

On Sunday, November 23, at 2:00 PM GMT the flurry of flash deals will make way for all of the Big Fall Sale's daily bundles, available for the final two days of the sale.

With this eventful Fall sale, the glorious homecoming of timeless Lucasfilm classics, and the launch of this year's indie darling This War of Mine, the last quarter of 2014 has shaped up to be a glorious time for gaming on GOG.com!
Source: GOG.com
In this article: big-fall-sale, big-fall-sale-finale, bundles, cheap, Deus-Ex, discounts, drm-free, fez, ftl, ftl-faster-than-light, gog, gog-big-fall-sale, gog-com, good-old-games, holiday, holiday-2014, linux, mac, pathologic, pc, rogue-legacy, rollercoaster-tycoon, sale, sam-and-max, sam-and-max-beyond-time-and-space, sam-and-max-save-the-world, sam-and-max-the-devils-playhouse, system-shock-2, tex-murphy, wing-commander
All products recommended by Engadget are selected by our editorial team, independent of our parent company. Some of our stories include affiliate links. If you buy something through one of these links, we may earn an affiliate commission.