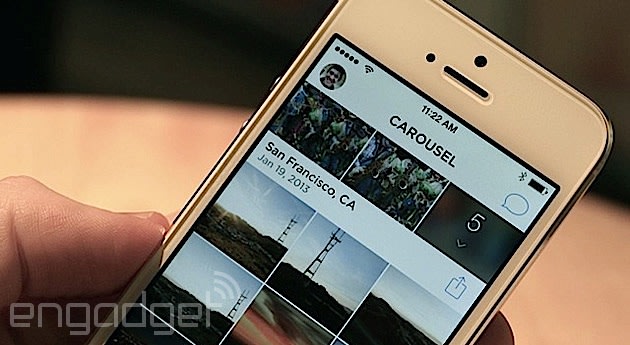 The photo backup features in mobile apps like Dropbox's Carousel and Google+ are there partly to take the load off of your phone -- you don't have to keep every shot close at hand. Wouldn't it be nice if the software got rid of local images when they're merely taking up space? Apparently, it will soon. Dropbox is giving some Carousel users a "sneak peek" at a feature that offers to scrap local photos (after they've been backed up, of course) when your device storage is almost full. It's a simple gesture, but it could save you some time; you won't have to fret over which pictures to delete just to make sure you can snap a few new ones. We've reached out to Dropbox to get an inkling of when this feature will be available to everyone, and we'll let you know if it can provide a timetable.

Source: The Next Web
In this article: backup, carousel, cloud, cloudstorage, dropbox, mobilepostcross, photography, photos, storage
All products recommended by Engadget are selected by our editorial team, independent of our parent company. Some of our stories include affiliate links. If you buy something through one of these links, we may earn an affiliate commission.