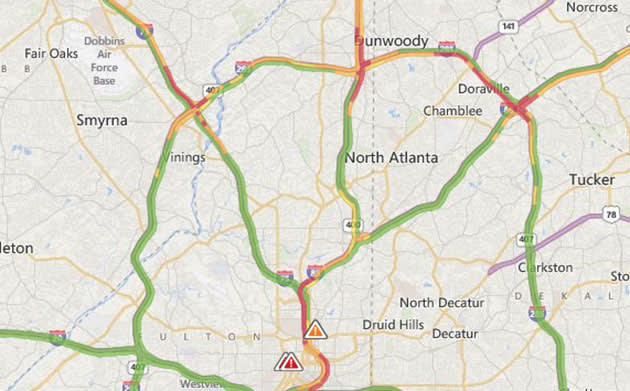 Bing Maps users outside the US will now have a better idea of how long it takes to get from A to B, as Microsoft has just launched Clearflow traffic estimation around the world. The system works by taking live traffic data for main roads and surface streets, then extrapolating it to unreported routes. That differs drastically from Google's approach, in which speed and position data is sent from each Maps user's device to estimate live traffic conditions. Google relies on strength in numbers of its Android (and Maps) ecosystem, which Microsoft lacks -- but Bing Maps uses Nokia's well-regarded Navteq traffic system. Whichever you use, you're now more likely to duck traffic and arrive at the ball on time.
Source: Bing Blogs
In this article: Bing, Bing Maps, mapping, microsoft, navigation, traffic
All products recommended by Engadget are selected by our editorial team, independent of our parent company. Some of our stories include affiliate links. If you buy something through one of these links, we may earn an affiliate commission.