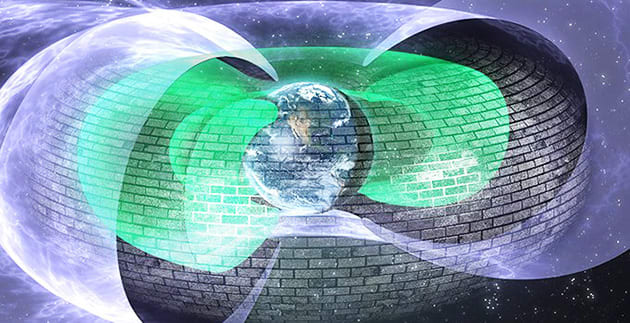 The holiday shopping season kicked off on Friday, and Inhabitat is here to help you get through the shopping madness with our carefully curated Green Holiday Gift Guide. With over 200 inspired gift ideas, we've got something for everyone on your list; from gadget geeks to green thumbs, crafters to hostesses, parents to kids. And speaking of unique gift ideas, here are some weird ones we saw this past week. Toilet company Kohler is behind one of the strangest products to cross our inbox in recent weeks: a smart toilet seat that can make your poop smell like avocados. Seriously. For the person who can't live without the internet, there's Lantern -- a tiny solar-powered device that brings connectivity to off-grid areas. And Balance Edutainment has created the world's first interactive pajamas, combining organic and fair trade cotton PJs with a mobile app and books for children.

Shields up! It may sound like science fiction, but a team of scientists from the University of Colorado Boulder just discovered a Star Trek-like invisible shield surrounding the Earth that protects it from "killer electrons." The shield lies 7,200 miles above the Earth's surface, and it stops ultrafast electrons that could threaten astronauts and fry satellites.

This past week marked a milestone for renewable energy -- according to a new report, the price of solar and wind energy have fallen so much over the past five years they've finally reached grid parity in the United States, meaning that they are cheaper than fossil fuels. The country's largest solar power plant is now up and running in Southern California. The Topaz Solar project in San Luis Obispo County includes an astounding 9 million solar panels across 9.5 square miles and generates 550 megawatts of clean energy. California will also soon be home to the world's largest lithium-ion battery. Southern California Edison is set to obtain a massive 400MW battery, which will provide power during peak energy periods. And in a futuristic proposal that is raising eyebrows in the design world, Japan's Shimizu Corporation is proposing to build an underwater city that would be powered entirely by renewable energy. The Atlantis-like city would be contained in a 1,600-foot-wide sphere that could house up to 5,000 people.

What will the cities of the future look like? For one, they may be 3D printed. Foster + Partners, one of the world's leading firms, is partnering with a Swedish concrete manufacturer to create the world's first 3D-printing concrete robot The device promises to save time and money while enabling architects to create objects in any shape. City streets will be a lot different too -- four design teams recently outlined the future of personal transportation, and they all agree that the year 2050 will look radically different than the present. Design firm IDEO also unveiled its vision of what the vehicles of the future might look like -- the firm thinks self-driving cars could drive increases in efficiency, convenience and urban growth. In other green transportation news, Mini recently unveiled a folding electric scooter that can transport commuters for the "last mile" of their trip without adding to existing traffic congestion. For those who'd prefer to ditch the city altogether and heed the call of the great outdoors, there's the Wide Path -- a tiny, foldable camper that can be towed by a bike. And if you've ever wondered what it's like to take a ride on the world's longest zip line, take a look at this video of the TreeTop Crazy Rider in Australia.

In this article: eco, environment, green, inhabitat, transportation
All products recommended by Engadget are selected by our editorial team, independent of our parent company. Some of our stories include affiliate links. If you buy something through one of these links, we may earn an affiliate commission.