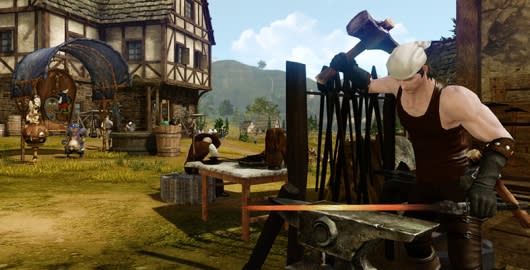 If you're following the ongoing saga of ArcheAge problems, you probably know that the game had all of the servers shut down over a holiday weekend, which could theoretically solve the game's exploit issues in the same way that setting fire to your house solves any problems you have with your wallpaper. The server issues were stated to be a result of emergency maintenance, with community representatives denying that it was connected to servers overheating, DDoS attacks, or exploits. The good news is that out of the game's 21 servers, 16 were up and running last night, with the last five brought online early this morning.

Players are promised compensation, which will be revealed later today. Unfortunately for players who had taxes due, the timers for all services continued to roll while the servers were down, so crops, housing plots, and the like were all still affected by time during the lengthy maintenance cycle. Trion says it is "definitely aware this is an issue for players with taxes due and is talking with XLGAMES about the best way to resolve it while the servers are offline." A server rollback is not in the cards.

But at least the servers are back online. We'll have more updates on the compensation for players when it is announced.
Source: Server connectivity issues, Forum FAQ
Coverage: Official site
In this article: aa, arche-age, archeage, bug, bugs, downtime, fantasy, large-shoes-like-those-worn-by-a-clown, maintenance, news, news-items, offline, pvp, sandbox, sandpark, server, server-downtime, server-issues, servers, trion, trion-worlds, xl-games, xlgames
All products recommended by Engadget are selected by our editorial team, independent of our parent company. Some of our stories include affiliate links. If you buy something through one of these links, we may earn an affiliate commission.