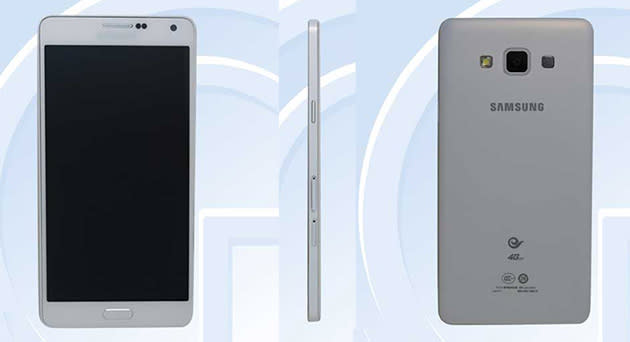 Samsung is far from done releasing thin, all-metal, mid-range smartphones, judging by a leak at Chinese wireless regulator Tenaa. Though more modest in specs than the Galaxy Alpha, the new 5.5-inch Galaxy A7 is definitely the A-series' alpha model, trumping the Galaxy A5 and A3 phones. At 6.3mm, it's Samsung's slimmest model ever, and also sports a 1080p screen, 64-bit Snapdragon 615 CPU, 2GB of RAM, 16GB (non-upgradeable) memory and 13-megapixel front/5-megapixel rear cameras. The model shown above is strictly for the Chinese market -- to find out whether it'll come to these parts, you'll have to wait for Samsung's official word.

In this article: 1080p, 64-bit, GalaxyA7, Leak, mobilepostcross, samsung, Tenaa
All products recommended by Engadget are selected by our editorial team, independent of our parent company. Some of our stories include affiliate links. If you buy something through one of these links, we may earn an affiliate commission.