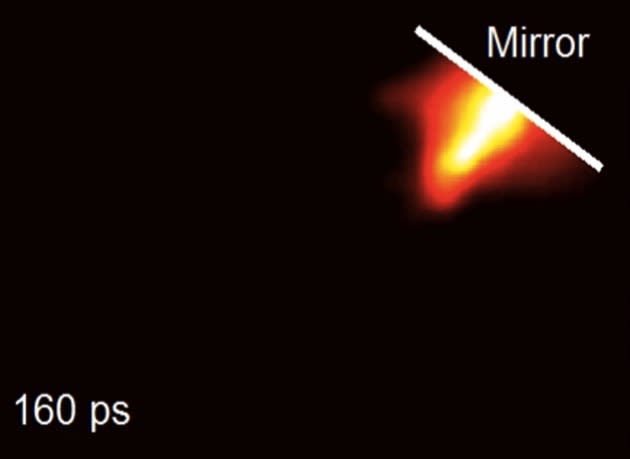 For most of us, high-speed image capture, say 120 or 240 frames per second, is enough to get a good look at stuff happening in the blink of an eye -- like a water droplet hitting the ground or a Bichon Frisé snagging his favorite ball. For faster subjects, industrial-strength high-speed cameras can grab tens of thousands of frames per second (or more). But when your rapidly moving target is light itself, you're going to need something a bit quicker -- to the tune of 100 billion fps, according to Nature.

Using a technique called "compressed ultrafast photography" (CUP), researchers at Washington University in St. Louis can track light as it travels and interacts with objects. It's a new spin on the streak camera method, where a sensor moves along with the light to record its motion. Previous streak camera setups have been limited to narrow, one-dimensional views, but the CUP technique allows for two-dimensional image capture. One example video shows a laser pulse sauntering by and reflecting off a mirror in a few tens of picoseconds (trillionths of a second).

So far, researchers have used the technique to explore a handful of phenomena, including how light reflects and refracts, as well as how photons behave when transitioning from one medium to another (e.g., from air to a resin). Nature reports the CUP technique could be used in the development of so-called invisibility cloaks that work by bending light around an object. So while it may not be the absolute fastest high-speed camera system currently out there, perhaps someday it'll help us get a bit closer to realizing those Star Trek/Harry Potter dreams.

Via: Motherboard
Source: Nature, Washington University in St. Louis
In this article: CUP, high-speed camera, invisibility cloak, InvisibilityCloak, laser, photography
All products recommended by Engadget are selected by our editorial team, independent of our parent company. Some of our stories include affiliate links. If you buy something through one of these links, we may earn an affiliate commission.