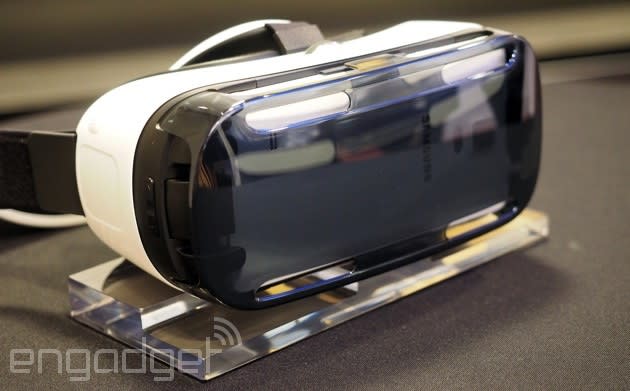 Consumer virtual reality is kind of, sort of, almost a reality. It's basically a reality today, actually, as Samsung's virtual reality headset -- "Gear VR" -- is available for purchase online. As previously reported, the headset will set you back $200 and it requires a Note 4 smartphone to act as its screen. The device is dubbed "Innovator Edition" by Samsung, and the Korean phone giant clearly isn't joking around with that phrase: the product order page requires you to acknowledge that you're buying a, "device targeted specifically to developers or early adopters of technology." So, how is it, and should you buy it? When we last used it at IFA 2014, we were impressed (check out our hands-on below the break). Whether you should buy it, however? We can't tell you just yet -- expect a full review of Samsung's Gear VR from Engadget just as soon as we get our hands (heads?) on one. If you just can't wait for the review, here's where you can buy Gear VR right now.

Source: Samsung
In this article: facebook, gearvr, hdpostcross, mobilepostcross, oculusvr, samsung, video, virtualreality
All products recommended by Engadget are selected by our editorial team, independent of our parent company. Some of our stories include affiliate links. If you buy something through one of these links, we may earn an affiliate commission.